Warlock’s Spell is a slot with a connection to the dark arts, the meaning of the word warlock being that of a male equivalent for a witch, generally a negative term. It’s still a game about magic, even though the star is a warlock and not a wizard. You’re going to find images on its reels which have this theme that is inspired by spellbooks, warlocks and witches, black cats and other elements of the dark arts. There are 5 reels inside, and you can expect to find a total of 20 pay lines active each round. The big payout will put $50,000 in your bank account.

The slot is accessible to US-based players, something which is true about all RTG slot machines.

The bets used in Warlock’s Spell cover up to 20 pay lines, and on each one there is a single coin that is used. You can have coin denominations of up to $5, which would take the total bet to $100 if you let it. The minimum bet is at only $0.01 though, so there is no pressure to wager the full amount if you can’t afford it.

With a 10,000x jackpot, the slot does very well in this department, giving away prizes which are better than in other games. You can win up to $50,000, depending on the kind of bet that you used. 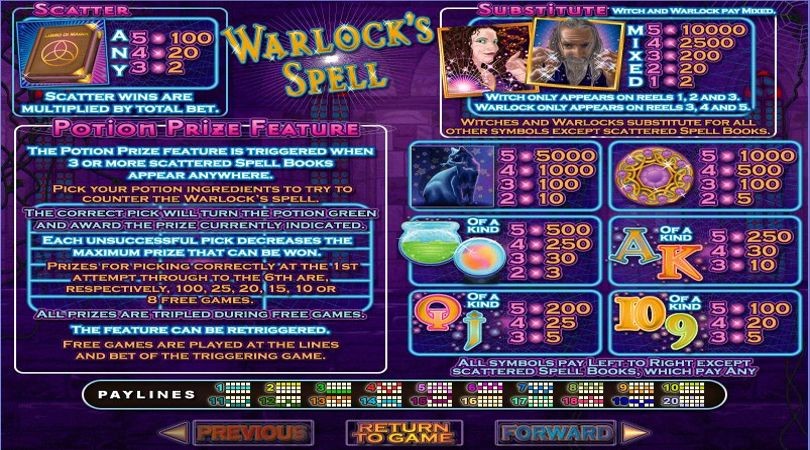 The Witch and the Warlock are the two symbols with wild abilities in use here. They’re both used in the game, with the Witch reserved for the reels 1, 2 and 3, while the Warlock can appear on the reels 3, 4 and 5. You can form combinations of Witches and Warlocks that are mixed, so both symbols can create their own combo and they pay up to 10,000x when this happens. Both types of wilds can replace regular symbols in combinations, and they can’t do anything about the Spell Book scatter.

The Spell Book is the symbol which you rely on to get the bonus feature started, and all that is needed is for 3+ such icons to be somewhere on the reels. You also get a cash prize when this happens, so not just a feature. The prize can reach 100x the value of the round’s bet.

As for the feature, it’s called Potion Prize. You pick the ingredients to be used in a potion, and if you get the right ones, the color of the liquid will be green and give you a prize. With each try that is not successful, the value of the prize will go down. The faster you get the potion right, the more free spins you receive.

You can get between 8 and 100 free spins, with all prizes tripled in value. You can also re-trigger the feature.

With all the stars shown in the poker cards, you get the impression that it’s a slot machine about astrology and not dark magic. The action seems to take place inside the warlock’s lair, a dark castle. You get things like black cats or witches as well, so you will not mistake it for a slot about white magic.

While the design is not that good, the top payouts of up to 10,000x, the chance to win 100 free spins and even to take advantage of 3x multipliers will make this a much more appealing choice than it might seem at first.