Vulcan is a slot machine which is dedicated to the gods of Ancient Rome, and to one of them in particular. It’s Vulcan of course, the god of fire, volcanoes, and metal working. The slot appears to be just as much about Ancient Rome as it is about to fire and about the god that governs it. The Ancient Rome slot machines are quite common, but this is the first game I see dedicated to Vulcan. It’s a game which has 25 pay lines on 5 reels, with a $3,000 jackpot.

You should be able to try out Vulcan from the US as well, just like you can play any RTG slot machine from that country.

There are two parts to the bets placed in Vulcan. One of them has up to 25 coins, for just as many lines that are active. The second part has 10 coins, so an extra 40%, to get the Feature Guarantee active. With coins going up to $1 only, and with 35 coins in the water, you can spend at most $35 on one spin. 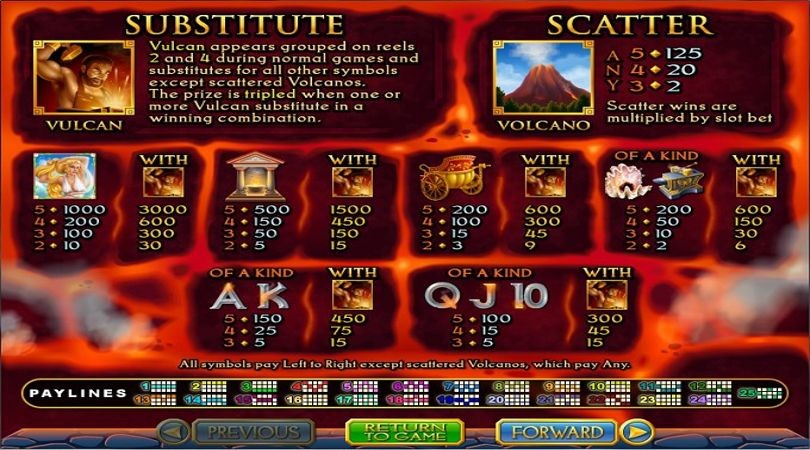 In the wild symbol, we see Vulcan, shown there as a blacksmith that’s using his hammer. This is a stacked wild, which is used on the 2nd and the 4th reels for all regular spins. Its job is the usual one, to act as a substitute, but it will not be able to create its own combinations as well since it doesn’t appear everywhere. There is an added bonus to the presence of wild in a combo, a 3x multiplier which will triple any regular prize.

The next symbol of importance in this slot is the scatter, which will reward the player with up to 125x the bet. Should you land three, four or five Volcano symbols on the reels, your reward will be between 2x and 125x the wager. At the same time, you will win 15 free spins, in a feature called Fire of the Gods. The free spins get 2x multipliers, so the top jackpot could go up to $6,000 if the wild also helps out.

The design is appealing, using a mix of fire, gold, and black which looks great together. There are plenty of Roman, fire or god related symbols, but there are playing cards as well, and they seem to be made out of metal. There are plenty of elements to suggest an Ancient Rome connection, even more than there are Vulcan related images.

Like most Ancient Rome themed slots, it looks elegant, and as an added bonus the focus is on one of their gods, not just on their weapons and objects. The slot pays very little though, and that’s one downside I can’t get past.