Voodoo Magic is all about the black arts, and specifically about Voodoo, one of the more famous such religions that exist today. Everyone knows about the dolls with pins in them, but the game goes further and manages to offer a view of the religion that makes it look like it’s witchcraft. With skulls, Voodoo dolls, dangerous potions, masks and daggers, the game looks like a lot of fun, especially if played near Halloween. There are 5 reels and 13 pay lines, and the payouts can get you up to $10,000.

The game is playable in any country that is accepted at RTG casinos, so the United States is also on that list.

The betting system is normal for RTG, with coin denominations of up to $5, one of them for each pay line. The number of lines is the unusual part, 13 being available here. The maximum bet will get up to $65.

The big prize is not actually that impressive here. You only get up to 2,000 coins with the big prize, triggered by a combo of five wilds. That’s a value of up to $10,000. 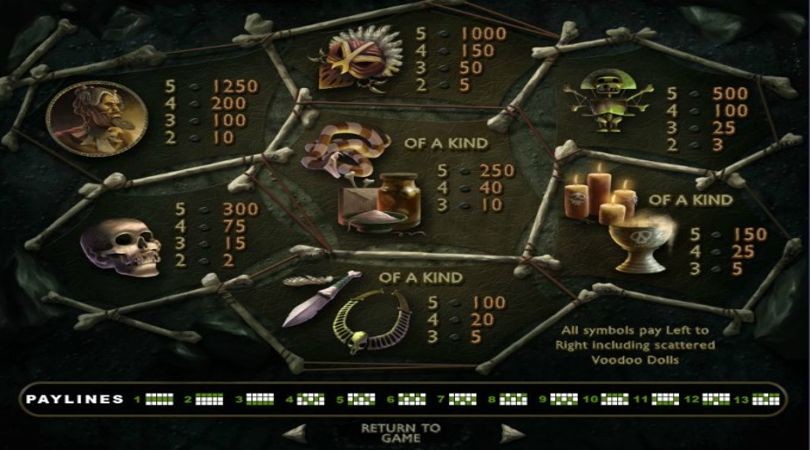 The Voodoo Priestess looks almost like a zombie, but that just makes the slot more fun and the Voodoo religion a bit more creepy. A wild will count as any other symbol, but only if first it lands in the spot where it’s needed, with other matching symbols for that combo in place already. It doesn’t replace scattered Dolls. On the other hand, it forms its own combinations, paying up to 2,000 coins.

The Voodoo Dolls, which of course has a pin in it, will be a scatter which pays by being present on the reels, going from left to right. Payouts start at 2x the bet for two scatters, and can get up to 100x for five.

The slot has something called Black Magic Free Spins. Anytime you get a scatter win, you also get free spins active, with up to 25 rounds. With a bit of luck, you will also get a Magic Multiplier, which is equivalent to the number of the spin (1x for the first spin, 2x for the second spin, etc). Scatter symbols are not part of the free spins.

Voodoo Magic is one of the most impressive slot machines that I’ve seen dedicated to the dark arts. The action seems to be set inside some creepy forest, with very little light shining through the trees. The symbols are 100% themed, nothing out of place inside, and they include things like jewelry, skulls, a priestess, dolls, snakes and candles.

If you want to play a game and Halloween is near, or if you simply love a scary game, there are few slots out there that look as good as this one does. Unfortunately, the payouts are not that high, and with 13 pay lines I would’ve expected bigger prizes from the slot.