Vikings Voyage is a game which was created by RTG, with a theme that is obviously inspired by one of the most famous warrior civilizations, by the Vikings. They’ve been covered by a lot of other slot machines in the past, and most of them did a decent job with this topic. Vikings Voyage looks more dated perhaps, and it has a few too many playing cards, but there are good things about it as well. The slot has 5 reels, 20 bet lines and it can pay $25,000.

Vikings Voyage is present on the RTG powered gaming sites, and the US-based players can try it out as well.

If you’ve played one slot machine from RTG than you already know what kind of wager you’re asked to place in Vikings Voyage. You have only 20 coins that you can use, one for each active pay line. Their value will go up to $5, with the starting point at $0.01. If you put it all together, you end up with a bet of up to $100. 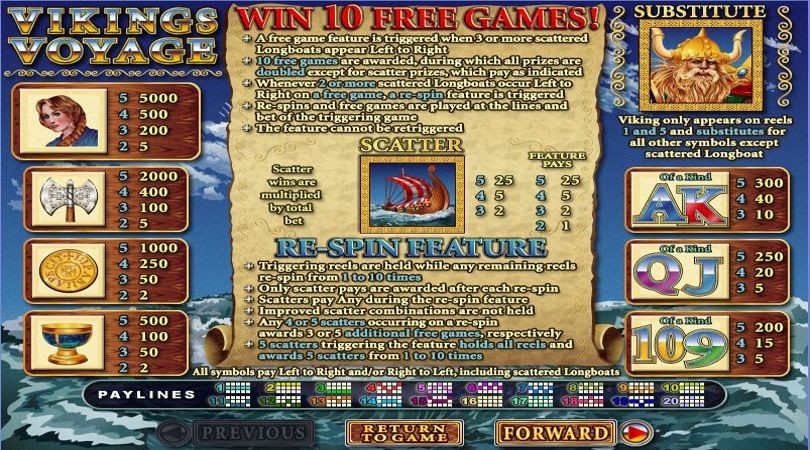 The image of a fierce Viking warrior is being used for the wild symbol, a very important feature in any slot machine. There are some limits in this case though, as the wild is only allowed to appear on reels 1 and 5. From there, the wild is capable of substituting for symbols which don’t have other abilities, meaning that it doesn’t work with the scatter.

Next, we have the Longboat, the famous Viking ship that they used to cross seas and even oceans. This would be the scatter feature, which rewards the player just by being present with enough symbols on the reels.

You get a payout of 2x, 5x or 25x the bet for 3, 4 or 5 scatter symbols, and at the same time there will be 10 free games activated, all of them with 2x multipliers for their wins.

The graphics of Vikings Voyage were well handled in many areas, mostly where the themed symbols were used. There are plenty of non-themed icons as well though, with playing cards that come in two colors for some reason. You see the open sea in the background, with longboats visible on it.

I enjoy most Viking themed slot machines, so I liked this one as well. I’m not thrilled about its non-themed symbols, but there are other things that make up for them, like the free spins feature.