A victory is a slot machine that RTG created to celebrate the Battle of Trafalgar, a naval engagement between Britain and the combined forces of Spain and France. This was one of the battles from the Napoleonic Wars, which took place in 1805, on October 21st. The British were the victors, and they confirmed that they ruled the seas with it. The slot that RTG created has 20 pay lines, and its biggest payouts can bring the player $50,000.

Though it’s something that’s more for the Europeans, for the British specifically, US players can just as easily play this slot machine if they want to.

RTG’s standard betting system was chosen for this slot machine, which means that you can spend as little as $0.01 per line, or you can take the wager up to $5. With 20 lines active, the bet can go up to a maximum value of $100, no higher. It’s a normal maximum bet, which is in use in a lot of slot machines, especially the ones from RTG.

The game advertises that it offers a jackpot of 10,000 coins, so you can expect up to $50,000 cash from it if you use the maximum coin value. 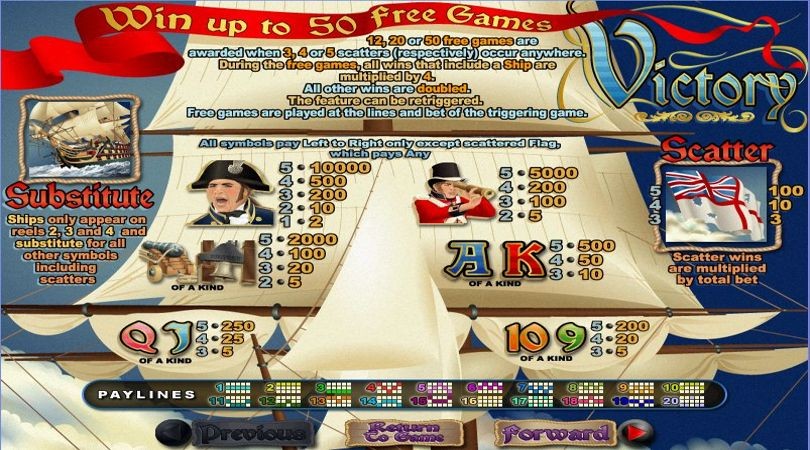 The Ship is a wild symbol. This icon can appear only on the middle three reels and from there it acts as a substitute for any other symbol, even the scatter being on that list.

12, 20 or 50 free games can be won if there are 3, 4 or 5 scattered Flag symbols, respectively. These scatters also give away considerable prizes, which vary from 3x to 100x the triggering bet. The chance to re-trigger the free spins is also there, you just need to land another set of 3+ scatters.

If you win a prize during the free spins, its value will be at 2x the amount mentioned for the base game. With a wild Ship contributing on that pay line, the multiplier will be 4x. 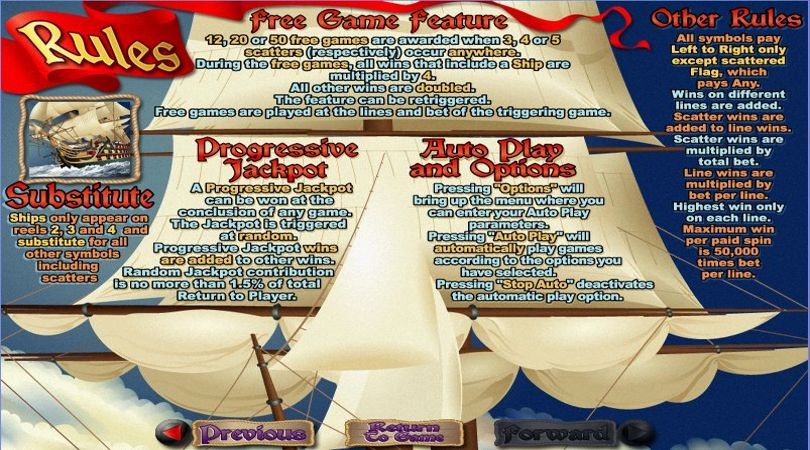 Though the themed part of the design is well done, there is also another side to it, with lots of playing cards which really don’t belong in a slot dedicated to a 19th-century sea battle. The themed icons include the captains from two ships from opposite sides, the French one is responsible for the top jackpot being awarded. Guns, bells, ships, and flags are also used, but the majority of the symbols are playing cards.

It’s the only slot machine that will have this theme, so if you have an interest in history, or you’re simply on the side of the British, you will probably enjoy it.