Treasure Chamber is an RTG creation, and once you look at it I think you will notice that it has a sort of connection with the Indiana Jones movies, the main character is similar and the action featuring the same type of treasure-filled temple from South America. The inspiration for the lost civilization appears to have come from the Mayans, and you can see their influence in the playing cards and in some of the themed symbols. 5 reels, 20 lines, and payouts of $50,000 are offered inside.

You can play Treasure Chamber at any RTG casino, which is true even for US based players.

The full betting range used here is between $0.01 and $100. It would have between 1 and 20 coins in it, and their denomination will go up to $5. It’s a standard betting system for this developer.

A top prize of 10,000 coins is promised, and that’s actually a pretty good jackpot to go after. It can mean $50,000 cash for the player if he used the maximum coin value. 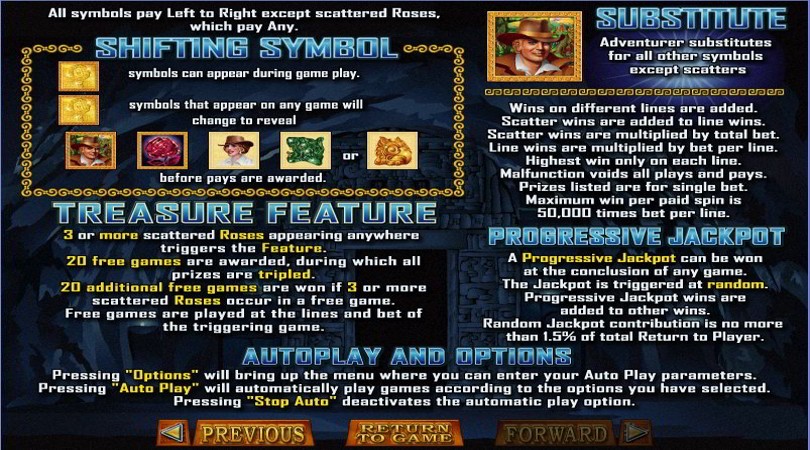 The most important symbol would be the Adventurer. The reason would mainly be the fact that it awards the best prize, 10,000 coins if it manages to form a good enough combination formed out of matching symbols. If it doesn’t form a combo, it can still be of help as a wild symbol. As usual, the wild can’t replace scatters, but it does this with all other symbols.

The Rose is also important, a symbol which doesn’t make a lot of sense for this theme, but which can give away payouts of up to 200x the bet and trigger a special feature. It will do this by appearing at least three times on the reels, in any position.

The Treasure feature needs the 3+ scattered Rose symbols that I mentioned, and it can bring you 20 free spins, with 3x multipliers. 3+ scatters, if they appear again, will re-trigger this feature.

The Shifting Symbol is also part of the slot, and it takes the form of a golden Question Mark, which appears at random, and then turns into a themed symbol. It can turn into a scatter, a wild or one of the three high paying regular symbols. 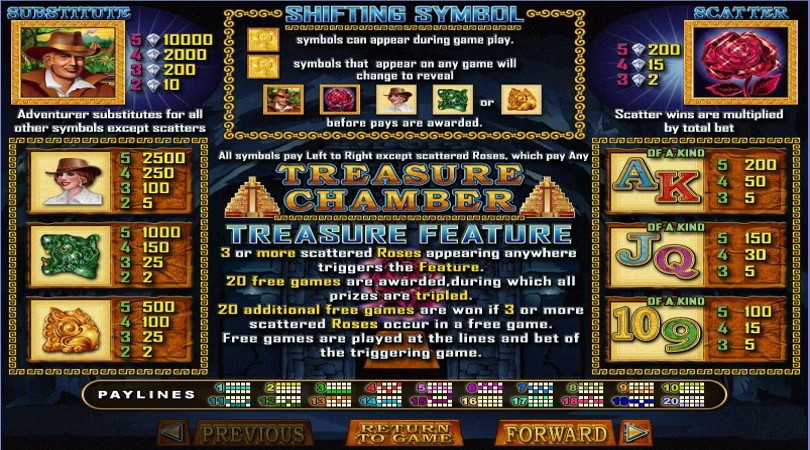 I’m not 100% happy with the design of Treasure Chamber, and it’s not just because there are too many playing cards present on the reels. It’s also the quality of the graphics, the drawing style for its characters and other symbols, which don’t feel good enough these days.

Some of the features and the top payouts of Treasure Chamber are the ones that make the game worth pursuing. There are other parts that are not as fun, and the design would be the main problem I have with the game.