The Shark sports a dated design, a theme that is inspired by sharks and other ocean creatures, and it offers a progressive jackpot, which is about the only thing that saves it. The theme is not unusual, but generally, the design of such games is a lot better than what we’re getting in The Shark. It also has a limited number of pay lines, 9 on 5 reels, and besides the progressive jackpot, you have payouts of up to 1,800x.

RTG powered slots are available in the United States, and The Shark is no different.

You use a maximum of five coins per line, and with nine lines in use, the maximum bet will have 45 coins in it. The coin denomination is chosen by the player, and there are a few different values to pick from.

The big prize here appears to be a progressive jackpot, though you’re not exactly told how much it will mean for you. The fixed payouts give you 1,800x, which can mean up to 9,000 coins. 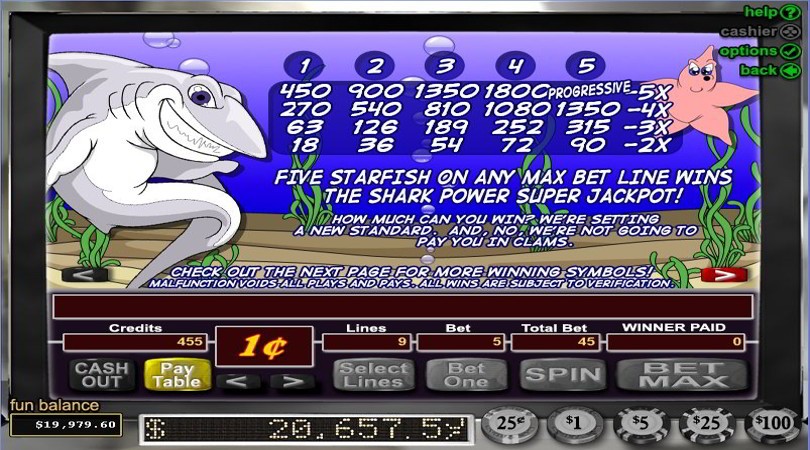 Sunken Treasure is the first of two features which are placed in this slot. You have to collect Treasure Chests as they appear, and once you have three of them, one will open up and give you a prize. The most you can win is 495 credits.

The other feature is a bonus game, which also asks you to collect symbols, three Sharks this time. It’s a card guessing game, where you have to predict what card will come next, a High or a Low one, compared with the one shown. The biggest possible prize gives you 2,700 credits.

The design is about as weak as the list of features, if not more so. The action takes place at the bottom of the ocean, and on the reels, you have only themed icons, but of a graphics quality that is extremely weak. The Shark is shown at the top, next to the logo and playing cards.

I wouldn’t play this game again, and not just because it doesn’t have a good design. It’s not very clear on the progressive jackpot it gives away either, and the list of features is poor.

Gambling Guide and Online Casino Reviews
—
The Shark
Share this