The Nice List is a game that appears to be the response to another game from RTG, which was called The Naughty List. In both cases, the stars are Santa and two attractive young ladies, only they were considered naughty in the other game, and they’re nice in this one. The game keeps the same focus on traditional Christmas in 90% of its symbols, with the two girls being the only ones to show something different. This game has ways to win, 1024 on 5 reels. As for the prizes, they can give you up to $6,250.

Whether you’re on the naughty or nice list, you should be able to play this game, and this even applies to US-based players.

The game doesn’t ask of its players to use 1024 coins, instead of requiring only a fixed number, of 50 coins. They will be used for all the ways to win and the value of a single coin determines what the ultimate prize will be. Coin denominations range from $0.01 to $0.25, which takes the total bet from $0.50 to $12.50.

The big payout comes from the scatter symbol, which rewards the player with up to 500 times the triggering wager value, which for this game would mean up to $6,250. 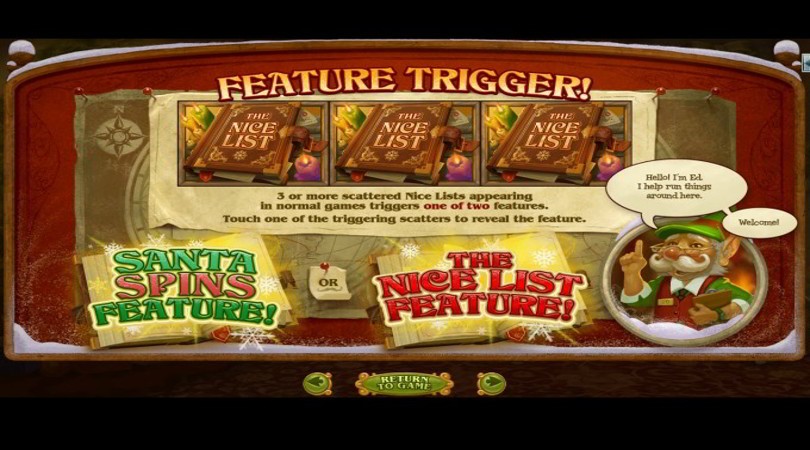 The reels 2, 3, 4 and 5 will get from time to time the symbol with Santa on it, appearing stacked on them and being used as substitutes for other regular symbols. It will not count as a scatter symbol. Given the ways to win system which is used, the wild becomes even more useful than in other slots.

Second, we get the Nice List, a scatter symbol which pays by being present on multiple reels, even if they’re not next to each other. With two to five Nice List symbols, you get paid between 1x and 500x the wager.

Two types of features can be triggered by the same scatter when it appears at least three times. You click a scatter to find out which one you got. It can be Santa Spins or The Nice List.

The Nice List has an incredibly appealing design, which will make practically anyone dream about the winter holidays. Featuring a beautiful Christmas tree and a house that is decorated properly, it also has on the reels symbols with holiday cards, with Santa, the two nice girls, cookies and milk.

I loved the design of the game, and even the features and payouts are adequate, especially for a game with ways to win. If you want to get into the mood for the holidays, this would be the game to do it for you.