The Elf Wars is part of a collection of Christmas themed slots which RTG offers, and just like the other games, it is inspired by a war that takes place at the North Pole. The protagonists, in this case, are the elves, while in others it was a battle between Rudolph and Santa. The war theme, mixed with the Santa theme, make for a great combination, and I for one enjoyed every single slot machine from the series. This particular game gets 50 pay lines and it can pay up to 2,000x.

To play this game, you can be located pretty much anywhere in the world, even in the United States, as RTG doesn’t discriminate based on location.

You’re getting a wager that should cover a total of 50 lines, to which the slot adds an extra 10 coins for the Feature Guarantee wager. The total will be at 60 coins, and the smallest bet possible is $0.60. With coins going up to $5 in value, you can spend up to $300 each round.

The game’s big payout is going to reward you with 2,000 coins, and that would mean at most $10,000 cash. It might not sound like a huge prize, but you do get a lot of lines and chances to get paid each round. 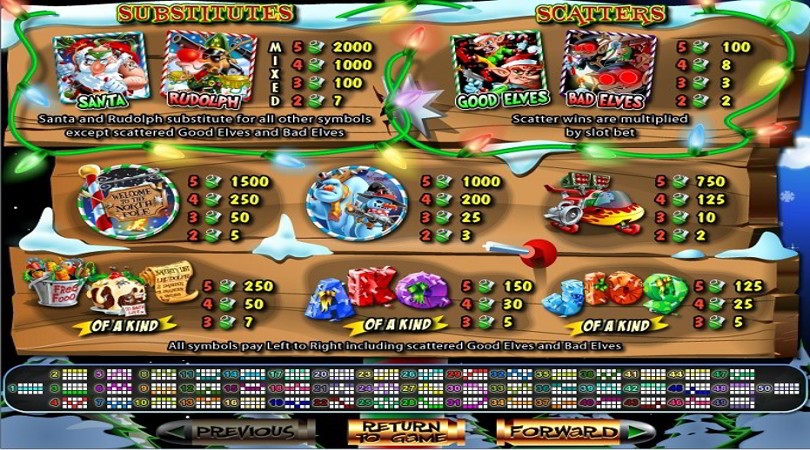 Both Santa and Rudolph are used as substitutes, as wild symbols which can also form combinations with up to five matching icons, paying up to 2,000x. The symbols they can replace are regular ones, so the Elf scatters are excluded.

Payouts can also come from scattered symbols, not just the ones that form combinations on pay lines. You need Good or Bad Elves symbols, two to five matching ones, and in exchange, you will win up to 100 times the best value.

One of the features that come from the Elves is the Re-Spin. 2+ such symbols, which appear going from the Left to the Right, will trigger a re-spin. Only the reels which haven’t triggered the feature will re-spin, the others stay locked.

Should you get at least three types of Good Elves or Bad Elves, you get access to a feature, where you have to pick one of the triggering symbols, to get one of the two available features.

For the Good Elves, the first feature is called Santa Strikes Back, while the second one is Jackpot Spins Good. With Bad Elves, you get Rudolph’s Rampage or Rudolph’s Revenge.

The design of all the slots from this series was very good, even though they used their fair share of playing cards on the reels. There are those cards that I mentioned, wrapped up as gifts, and then there are the images of the war, with the protagonists and things like naughty lists, poisoned cake or dynamite hidden in a bucket marked Free Food.

It’s a hilarious game, and I think you should give all the slots from the series a try. This one has a lot of pay lines, good graphics, and features that should keep you busy.