Tally Ho is a World War 2 themed slot machine, the focus on its reels being on the airplanes that fought in the skies above Great Britain and over Europe in general. The title is inspired by an expression which was used by British pilots, to let the others know that they’ve spotted the enemy airplanes. It’s an RTG title, with only average graphics, and with a layout of 5 reels/20 lines which feels just as average. It will pay at most $50,000 in the base game.

US players get to play this slot machine at RTG casinos, and they should have access to all of them, since the developer allows them all to play for real money. 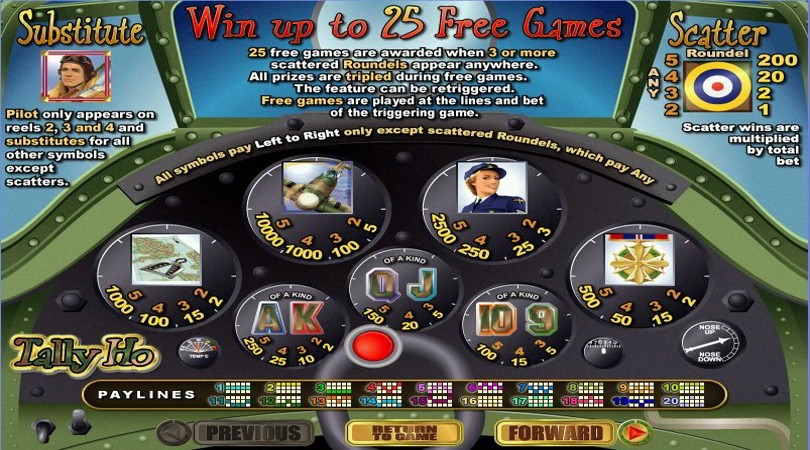 The substitute is the symbol which has the Pilot on it, a wild that is reserved for reels 2, 3 and 4. It substitutes for most symbols, excluding the scatters, and it doesn’t have any prizes to give directly.

The Roundel is the image with the concentric circles, colored in red, white, blue and yellow. These appear in any position, and they pay by taking into account the total number of scatter symbols, nothing else. Two to five icons will pay 1x to 200x the wager.

As for the free spins, they also get started when the Roundels appear in sufficient numbers, in this case in at least three locations. You receive 25 free spins if this happens, with 3x multipliers. This is a feature which can be triggered again.

The dated design is one of the things that I didn’t enjoy in this slot machine, which otherwise does pretty well in the other areas. You see a few fighter planes in the background picture, ready to go to war, but they’re not the problem. The issue I have is with the playing cards, very similar to each other and sporting a camouflage painting job.

I rather enjoyed the features and the prizes which are offered by Tally Ho, but the game could’ve done with a better design than it got.