T-Rex is one of the RTG slot machines, and it’s created with a theme that should be familiar to anyone that has seen the Jurassic Park movies. It’s inspired by dinosaurs, and the T-Rex is the hero of the game. The other images shown on it have various dinosaurs, but most of them are harmless herbivores. The slot plays with 5 reels and 25 active lines, and it can bring its players payouts of up to $50,000.

T-Rex is accessible to players that are based in the United States, the way most RTG slots are.

You can use a bet that will reach a maximum value of $125, but just as easily you can spend only $0.01 and the reels will still start spinning. The line bet goes from $0.01 to $5, and you have 25 lines which you can activate as you please.

The slot’s big payouts will offer you 10,000 coins, with a maximum value of $50,000. The prize can be won in the base game when the T-Rex wild applies a multiplier to a certain symbol combo, or during the feature from the wild directly. 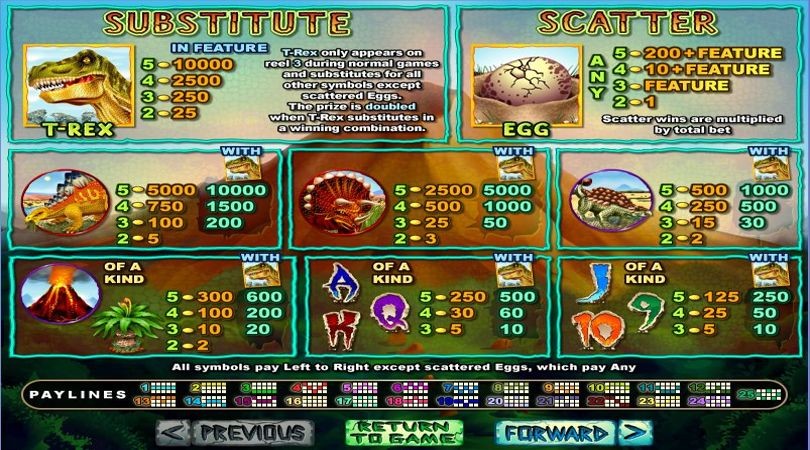 The T-Rex icon is the wild, the substitute that you’re going to be happy to see whenever it makes an appearance and manages to do its job. It replaces regular symbols only, no scatters, and it is reserved for the 3rd reel while in base game mode. It has a 2x multiplier, which will be applied to wins it helps form.

The scatter symbol is the Dinosaur Egg. This symbol triggers a special feature, plus it can bring you up to 200x the bet in payouts, if you have up to five of them on the reels, without mattering the exact position.

You start the free spins with three or more Egg scatters, and each one will bring you up to 10 free games. The appearance of the T-Rex on the 3rd reel during free spins will make it eat all other dinosaur symbols present, which is the only way for the wild to appear on the other reels as well. It can even create its own combinations at this point, paying up to 10,000x. You can re-trigger this feature, with the same 3+ symbols. 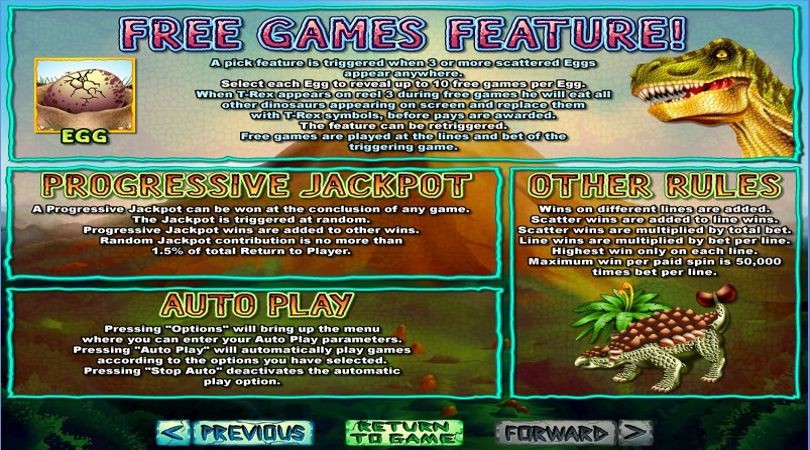 The design of T-Rex is not exactly a work of art, and even though the quality of the symbols is OK, the Royal cards look like they were taken from some horror show. You see the jungle in which the dinosaurs lived back then in the background, and there is even a smoking volcano visible, an obligatory sight in a slot with this kind of theme.

I’d play the game for its theme and for its top payouts, but I’m not impressed with the design or the features. It’s not a bad game though, just a bit dated.