Sunken Treasure is about treasures that are found at the bottom of the ocean, in sail ships that have sunk a long time ago, as they were carrying treasures from one continent to another, mostly from America to Europe. The game is themed around a treasure-seeking diver, and it offers a cartoon theme and a collection of symbols inspired by the ocean and by the treasures it hides. The game gets 20 lines, 5 reels and pays $25,000.

Access to Sunken Treasure is available to players from most countries, the United States being on that list as well.

You can count on RTG generally keeping the same betting system for most of their slots, and they don’t disappoint in Sunken Treasure. The slot uses 1 to 20 coins, and they have denominations which go up to $5. You can spend $100 each round of the game if you choose to max out the wager. 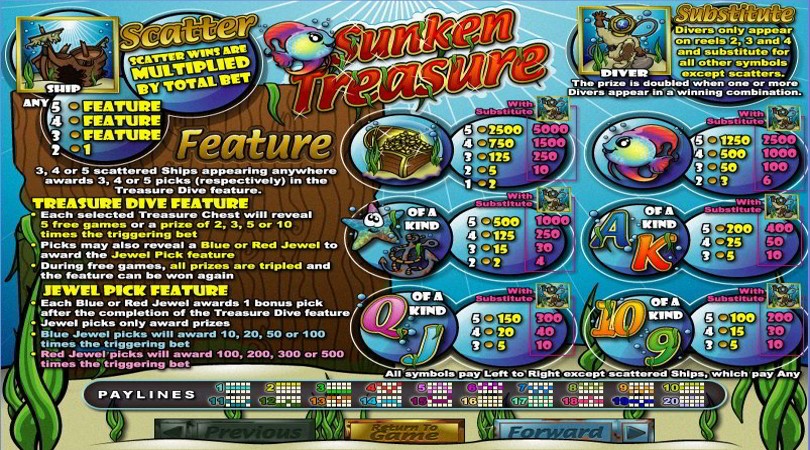 The Diver is the wild element in Sunken Treasure. This icon is visible on the 2nd, 3rd, and 4th reels, and from there it substitutes for almost all symbols, with the exception of the scatter. Get at least one Diver wild to help out with a combo, and its prize will be doubled.

The Ship is the other feature, the scatter which triggers a bonus game called Treasure Dive. You get this feature when 3+ Ship symbols are on the reels. The number of triggering scatters determines how many picks you receive in the feature.

Once Treasure Dive begins, you will get a screen with treasure chests, out of which you pick between 3 and 5, for 3 to 5 triggering symbols. Each one can bring you a prize of 2x to 10x the bet, or 5 free spins. You can also find Red or Blue Jewels, which will trigger a feature called Jewel Pick.

The free games that you win during Treasure Dive will bring you 3x the usual prizes, a multiplier being applied to each one.

As for Jewel Pick, if you trigger it, you get prizes based on the color of the picks you make. Blue Jewel picks bring payouts of 10x to 100x the bet. With Red Jewel picks, you get 100x to 500x the bet. 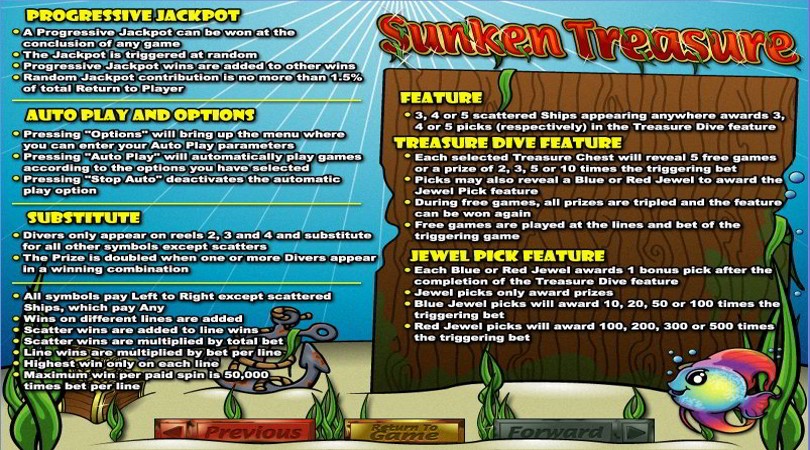 It’s a cartoon style design, which seems to have gone mostly for the humorous angle, then for the real one. There are some themed symbols on those reels, but there are some that are with playing cards only, and they’re a bit boring.

The game does well prize and features wise, but I’m not that excited about its design, which is generally much better in slots which are inspired by the ocean.