Slot Name: Spirit of the Inca

Spirit of the Inca is a gorgeous game, one that was created by Realtime Gaming and which is themed around one of the best-known civilizations of South America, no longer present now. The Inca people have left behind plenty of temples, statues, objects, and jewelry to allow us to learn about them, and at the same time to know how rich they were. This is one of the things that the slot wants to exploit, the idea of the rich Inca and the treasures that they left behind, and which you can have for yourself. The game has the standard setup with 5 reels/25 win lines and pays up to $400 normally, but with five progressive jackpots that are in the six-figure range.

The United States-based slot players will find this game, and its huge prizes, at RTG powered online casinos.

Prizes might be low, but besides the 2,000 coins/$400 that the fixed payouts can trigger, there are also five progressive jackpots to take home. I’m talking about the jackpots labeled as Grand, Maxi, Major, Minor and Mini, which can have values between high five figures and mid-six figures, basically bringing you hundreds of thousands of dollars. 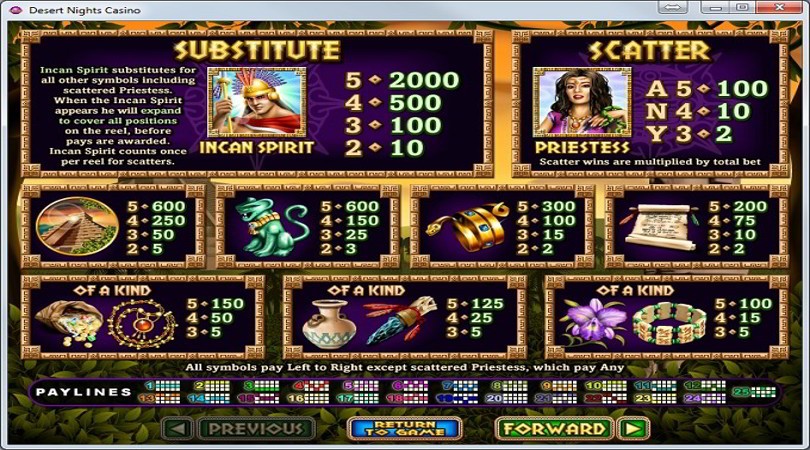 A symbol which is marked Inca Spirit is the one that gets the main role, as the symbol with substituting abilities, as the wild in other words. Wilds can create their own combinations, of two to five symbols, and they pay 10x to 2,000x if this happens. They also act as wilds, so they are useful because they give you more paying combinations in the long run. They can even replace scatter symbols, which is a power that they don’t have in most slots. This is an expanding wild, so its appearance can mean that an entire reel becomes wild.

The next symbol we should talk about is the Priestess, an attractive woman that is the chosen scatter of the game. Being a scatter, the symbol’s appearance can be in any position, it doesn’t matter, as long as there are enough of them in place. With 3, 4 or 5 Priestess symbols you receive 2x, 10x or 100x the wager as a prize.

To trigger a special feature round, you need the Inca Spirit wild on the 1st and the 5th reels, at the same time. You get 15 bonus symbols on the screen, and you pick 5 of them. You get up to 25 free spins from the first three picks, with a multiplier of 1x to 10x from the fourth pick and a chance for an extra feature from the fifth pick (Wild Reel, Extra Wild or No Bonus). If you re-trigger the feature, you win an additional 10 spins. 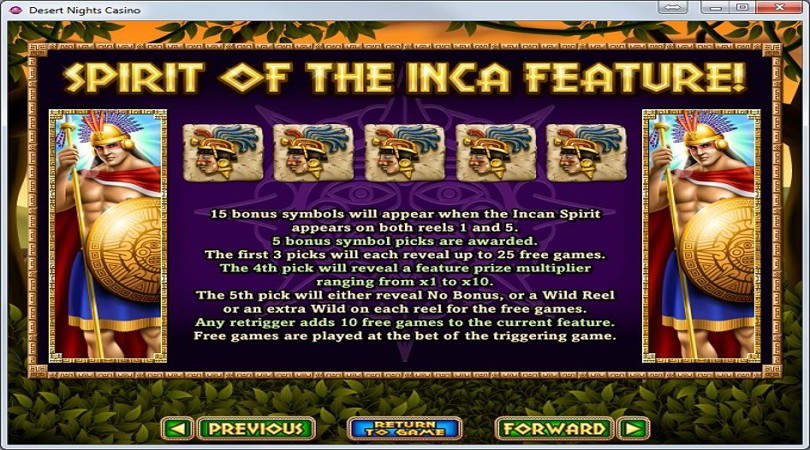 All the symbols in use here are inspired by the Inca, so you’re not going to see any playing cards. The quality of the design is very good, you see the Inca temples in the background, and overall I think it’s a game that is easy to enjoy.

Thanks to its big progressive jackpots, and the low wager requirements, I see no reason for a player to ignore this game. It’s worth at least a try, especially since the maximum bet is at $5.