Shark School introduces the player to a school like an environment, a high school by the looks of it, but where the students and teachers are fish, sharks and other creatures from the ocean. The game uses sharks in the role of jocks, which seems appropriate considering how they’re usually portrayed. A total of 50 pay lines are used for just 5 reels. As for the top rewards, you get up to $7,500.

Shark School is available in countries like the US, where RTG offers all its titles, one of the few companies to take this decision.

With a coin value that is between $0.01 and $5, and with 50 lines in the game, wagers in Shark School can be more expensive than in other titles, going up to $250. You’re not forced to go that high though, so you can go with a significantly lower bet. 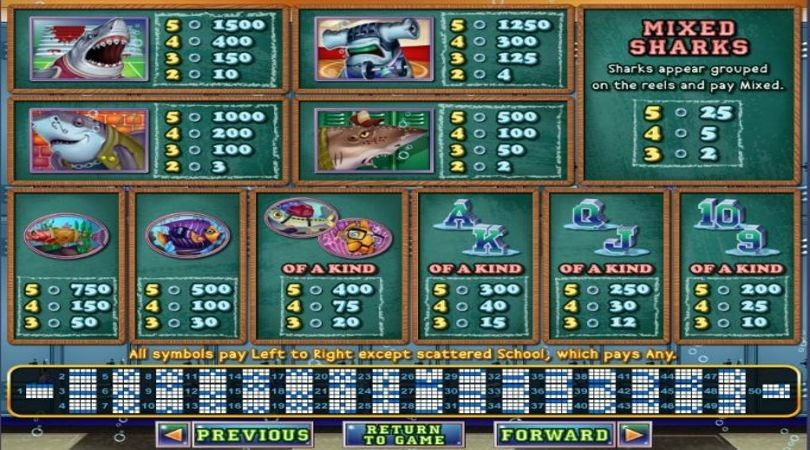 The Teacher symbol is actually the image of a squid. It’s a stacked wild symbol, which only shows up on reel 1. There are no symbols that the wild can’t replace, so even the scatter can benefit from its presence.

Speaking of the scatter, you see the Shark School, a regular human building that just happens to sit at the bottom of the ocean. Get these symbols on 3 or more reels, and you get a reward between 2x and 100x the triggering wager.

With 3+ Schools, besides cash prizes, you also get a feature. You click on one of the scatters to find out which feature you’ve won.

One of them is called “Swim Fishy, Swim”, and it features a race, between a helpless fish and a shark that’s following him. It’s a free spins feature, which advances the two racers whenever a fish or a shark appears on reel 3. If the fish gets eaten, or if 25 spins pass, the feature ends.

Bad Sharky is another feature, with 3 to 10 re-spins, where a Shark takes over the 3rd reel, trying to eat fish symbols and replace them with sharks.

The final one is called “Don’t Eat The Teacher”, and it gives you free spins with 2x multipliers. Just how many you get, depends on whether the shark manages to eat the teacher or not. If not, the multiplier goes up by 1x and you get to continue with the free spins. A maximum of 25 spins can be played for free, or until the Teacher gets eaten. 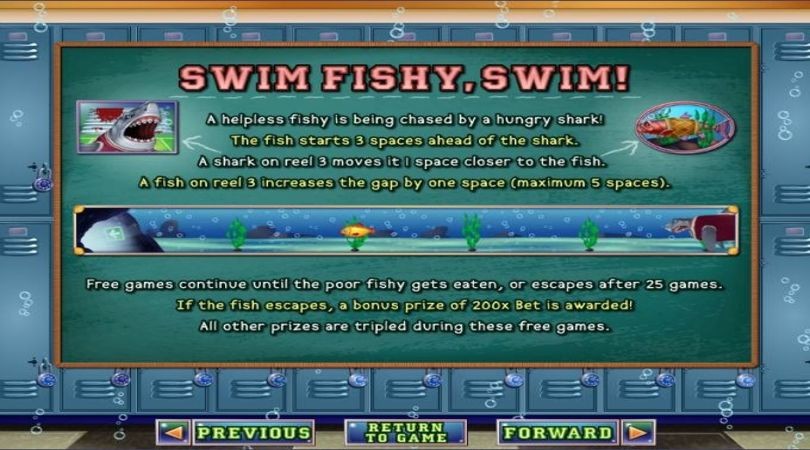 The design in Shark School is actually very well done, and it will remind you of a typical American high school, with the jocks and the geeks, the latter being regular fish and in fear from the sharks all the time. It seems like a game that is actually interesting, quite different from most that the market puts out. The quality of the design is good, being done in cartoon style.

Thanks to all its features, free spins, multipliers, and the funny theme, Shark School deserves a close look from players. It doesn’t pay very well though, only 1,500x at best.