RTG has an entire collection of slot machines themed around a war that goes on between Santa Clause and Rudolph, the famous red-nosed reindeer. Santa appears to be victorious in this particular title, while in other slots from the series he’s getting a bit of a beating. It’s an alternative way of looking at Christmas, and it can be a lot more fun than the traditional slots. You will find 25 pay lines inside, arranged on the usual 5 reels. The biggest payouts of the game are at $62,500, the alternative being the progressive jackpot.

You can find this game in any RTG powered casino, which means that you are going to be allowed to play it even if you do it from the United States. 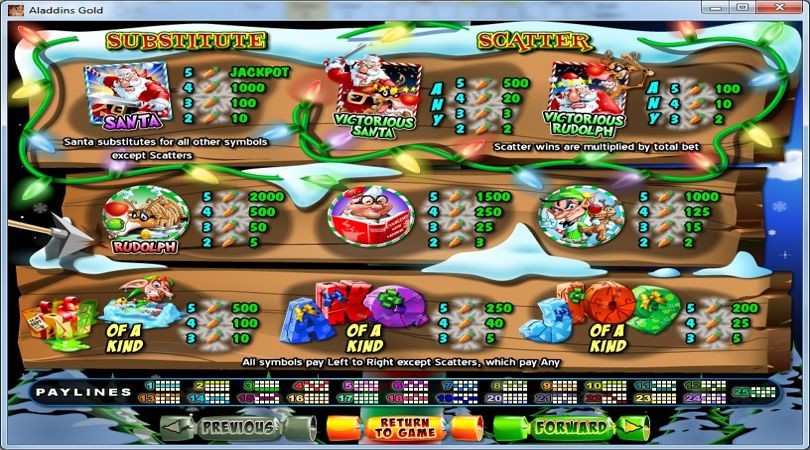 Santa, holding a sword and shown in the middle of an attack, is the substitute in this game. As a wild, you can use this symbol to form up combinations when it’s in the right place, being capable of taking the role of another when this brings you a win. If it forms a combo directly, only with wilds, it can pay regular prizes, or it can even give you a progressive jackpot.

Scatter symbols show Santa fighting Rudolph. They will either display Santa or Rudolph as victorious. If you get two or more scatters of the same type, you get a prize. Santa Victorious pays up to 500x the bet, while Victorious Rudolph pays 100x.

To trigger features, you need 3+ scatters of the same type. Victorious Santa will trigger the bonus Santa Strikes Back, with 7 free spins and an initial multiplier of 1x. You can get an extra 7 spins and a multiplier that is higher by 1x if you reset the feature, which is done when you have candy cane icons collected for all the reels (in time, not all during the same spin).

Rudolph’s Revenge requires 3+ scattered Victorious Rudolph scatters. You get 7 free spins from it as well, with a 2x multiplier plus a number which depends on how many Santa icons are present. 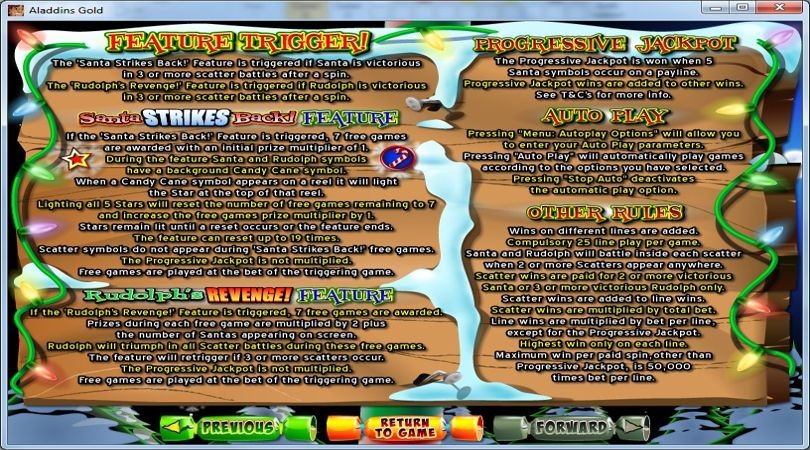 The game looks just right for a title which focuses on a battle at the North Pole. You have symbols with the main protagonists, with Mrs. Santa, with elves and gifts, but also with playing cards that are gift wrapped. Even the background image will show off one of the scenes from the conflict.

All three slots which focus on the war between Rudolph and Santa are worth a look, especially since they have progressive jackpot as well to offer.