In Rudolph’s Revenge, you will encounter a slot machine which gets a theme inspired by Christmas, but with a different angle chosen for it than you might be used to. Rudolph and Santa are waging war on each other here, and the result is a hilarious slot machine, one of three such titles that RTG has released. The game offers progressive jackpots, 5,000x payouts as alternatives, plus you have 50 pay lines for the wins to form on.

Rudolph’s Revenge is one of the RTG slot machines, which means that you can play this game even as a US player.

This is a slot with a fixed wager, of $2 per spin, where each pay line gets only $0.04 for its bet. You have 50 lines total, and they’re all active. There is no option to change the bet value.

The game will offer a progressive jackpot that is in the five-figure range, the alternative being a payout of 5,000 coins, which will be worth only $200. 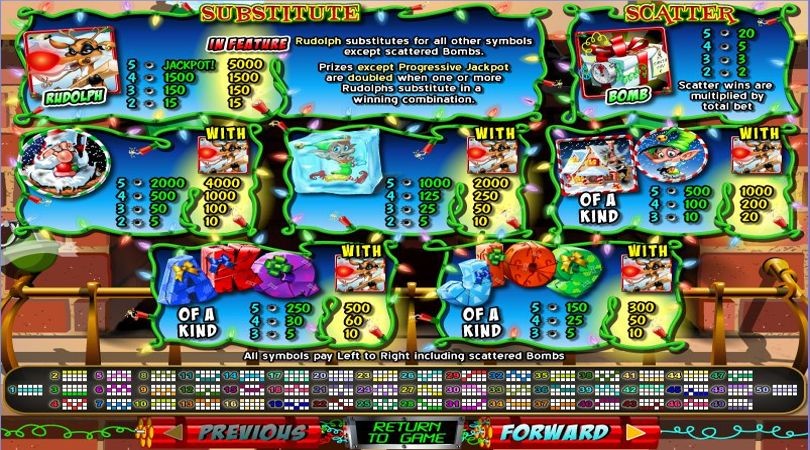 Rudolph, and his red nose is shown in one of the major symbols of the game, the wild. Get five wilds to form their own combo, and you get paid the progressive jackpot while in base game mode. If obtained during the feature, it pays only 5,000 coins. All prizes which are formed with the assistance of a wild are worth twice as much.

The Bomb, masked to look like a gift, will reward the player with its own prizes, of up to 20x the triggering bet, plus it will trigger the free spins. To get those spins, the requirement is for 3+ Bombs to appear on reels that go from left to the right. The advantage is that it doesn’t matter where on those reels the symbols appear. 2x multipliers apply to all wins you get during the free spins. 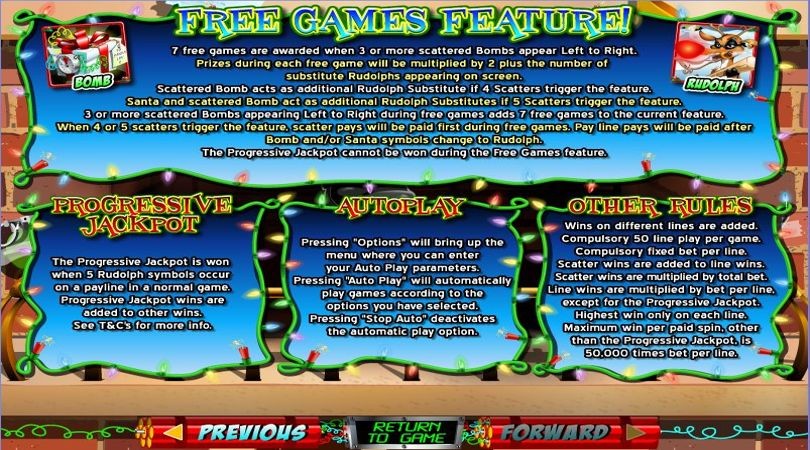 The quality of the design is one of the strengths of Rudolph’s Revenge, as it was for the other slots from the series as well. There are symbols like elves caught in ice cubes, gift-wrapped playing cards which show signs of abuse, bombs masquerading as gifts and other funny images. Best of all, you see in the background image Santa’s sleigh flying in front of the Moon, while a surface to air missile battery is tracking it.

It’s not your typical Christmas themed slot machine, but it’s definitely a lot more fun than the usual games that have this topic. It doesn’t hurt that it requires $2 bets and offers progressive jackpots in return.