Red Sands is RTG’s attempt at an Australian outback themed slot machine, the red sands being a normal sight in that area, and present in the design of this game as well. The slot doesn’t have the best look ever, and it actually is below average overall, but it does pay up to $25,000, and on its 5 reels with 20 pay lines you might find some cool features to improve it.

You will have access to RTG made slot machines from most countries of the world, United States included something that few other developers do for their players.

You are asked to cover a maximum of 20 pay lines per spin, but you’re the one that decides how many will be used. Each pay line needs one coin for the wager, so you use up to 20 coins each round. You also pick their value, with the maximum being $5, while the minimum is $0.01. The largest bet allowed here is $100.

The game will pay 5,000 coins at best, which would mean $25,000 cash. There is a random jackpot as well, a progressive prize that can be won at the conclusion of one of the paid spins. 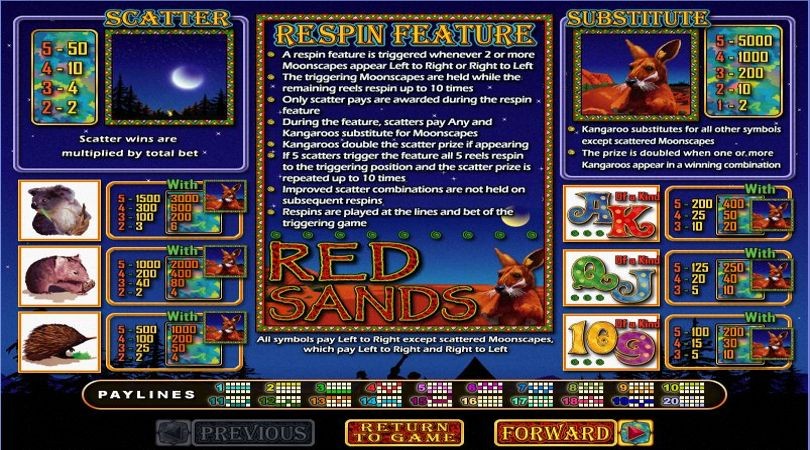 The image of a kangaroo can be seen in the symbol with substitution abilities, the wild icon. This symbol is known for being capable of forming combinations with regular symbols, and for also doubling the win value in this case. It doesn’t substitute for scatter symbols, unfortunately. It does form combinations of its own if it lands on the same line starting from the left. One to five such symbols together will pay anywhere between 2 and 5,000 coins.

The Moonscape symbol is the other big feature available in Red Sands. It’s a scatter, as is often the case, and it will pay 2x to 50x the triggering bet if you land two to five symbols anywhere on the reels.

The same 2+ scatter symbols also trigger a Re-spin feature. The symbols need to appear starting either from the right, or the left of the screen. The game keeps the scatters locked in place, re-spinning the rest of the reels up to 10 times. You get only scatter prizes during these re-spins, and the hope is that additional such symbols will appear. The Kangaroo wild becomes capable of replacing scatters as well. 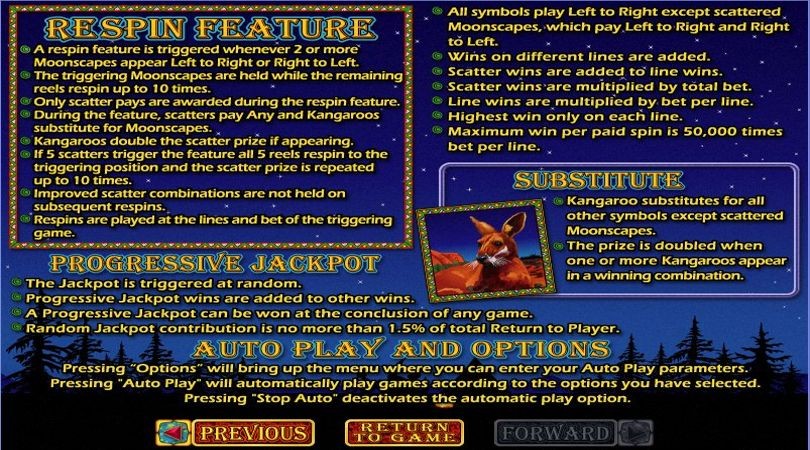 The game is a mix of wild creatures that live in the Australian outback, and poker cards with a design that makes them look like they belong in a circus-themed slot. It’s not the most impressive design RTG has put forward so far.

It’s a game that you should play mostly if you have a connection with Australia, but most players will be able to find better games in RTG’s collection.