Prince of Sherwood is a game that is inspired by the story of Robin Hood and his band of merry men. Hidden in the Sherwood Forest, Robin Hood stole from the rich and gave to the poor, a classic story that was turned into books, movies, TV series and games, including a few slot machines. RTG is the developer which created this game, and even though I’m not a huge fan of the design, I still enjoyed playing it, placing bets on its 20 lines and getting a chance at a payout of up to $25,000.

The story of Robin Hood is known around the world, so US-based players will probably want to try it out as well. The good news is that they can, thanks to the developer, which is RTG.

There are two types of prizes offered in Prince of Sherwood. One of them is the progressive jackpot, which is offered at random, at the end of a paid spin. The second one is a prize, which normally awards 2,500 coins, but it can be doubled to 5,000 coins thanks to the wild. Its maximum cash value is $25,000. 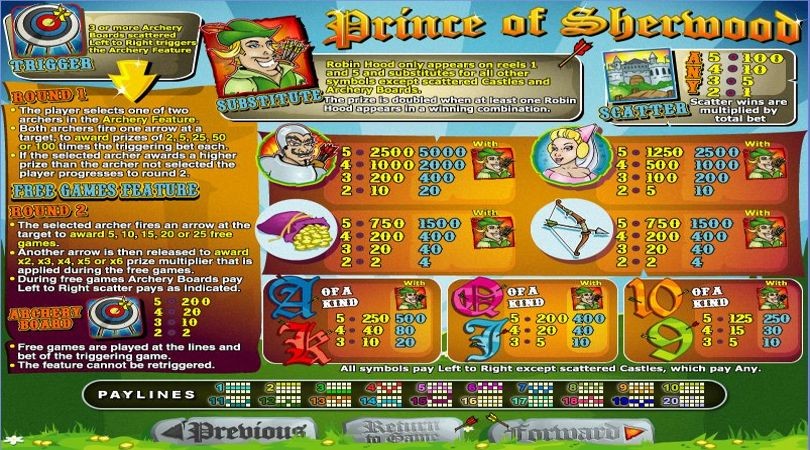 Robin Hood’s symbol is obviously the wild factor in this game. It’s the only symbol with substitution abilities, but the game only allows it to show up on the 1st and 5th reels. There are two symbols which can’t be replaced with wilds, the Archery Board and the Castle. On the other hand, a 2x multiplier is applied by the wild to the prize obtained with its help.

The first of the scatter symbols will help you get a good prize, one worth 100 times the bet, meaning up to 2,000 coins. You need a certain number of Castle symbols to get that amount, but at least it doesn’t matter where a scatter symbol appears.

The second scatter is the one with the Archery Board on it. It appears from Left to Right and in 3+ locations in the rounds where it triggers the Archery bonus game. It starts with a pick, of an archer to represent you. A prize of 2x to 100x the bet can be won once your archer shoots his arrow. If he also wins the contest, you move on to Round 2. He once again fires an arrow, giving you 5 to 25 spins for free. A second arrow will determine the multiplier, between 2x and 6x. 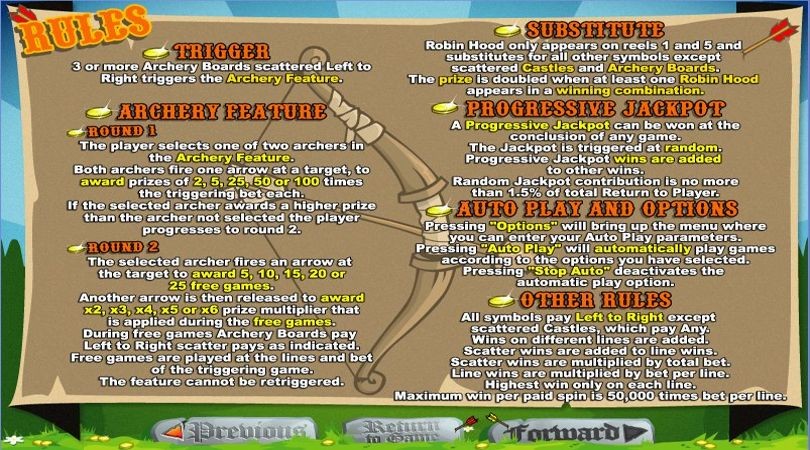 The cartoon drawing style in use here doesn’t make the game too easy to enjoy, most of the characters looking like caricatures, hero and villain included. There are better looking Robin Hood themed slots out there.

The game’s theme, features, and even the payouts are good, but I’m not that happy about the actual design. Still, if you enjoyed the story as a kid, chances are that you will want to try out Prince of Sherwood.