Pirate Isle has a theme that is quite common these days, slot machine developers loving to focus on pirates and the treasures that often follow. However, it does this with a 3D style design, which makes the game at least different, if not more attractive than many other games with similar inspiration. It’s a game that has 25 paylines on 5 reels and it will offer players that give it a try payouts of up to $1,500.

RTG’s powered casinos all accept players that are based in the United States, and so Pirate Isle should be a very accessible title.

With scatters contributing, payouts can offer up to 5,000 coins to the slot’s players, meaning at most $1,250 cash. 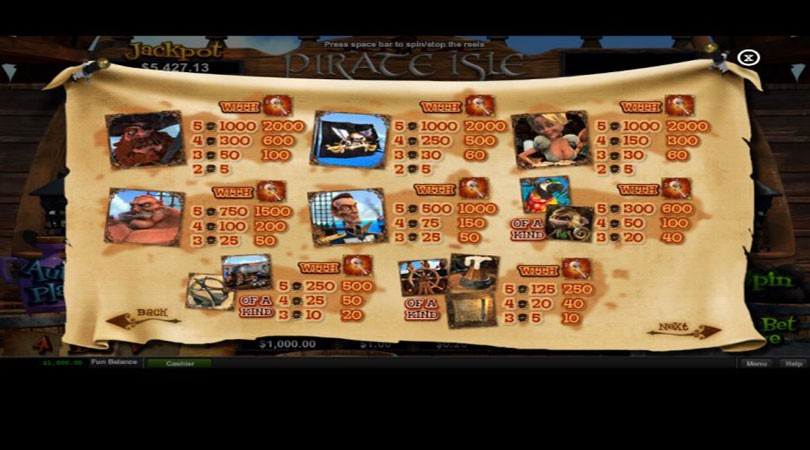 The Skeleton Key is the stacked wild, a feature that should come in handy, but which has been limited to appearances only on the 3rd reel while in the base game. With the exception of the scatters, wilds can substitute for all other symbols. A wild’s appearance on a payline will double the payout, if a win forms there.

You will discover that two types of scatter symbols can appear in the game. We have the Galleon scatter first, offering up to 200x the triggering bet in payouts. Second, there is the Treasure Chest, which also pays, but goes only up to 150x the bet.

If you happen to get those 3+ Treasure Chest scatters during the same spin, you trigger a feature which can bring you free spins. You are taken to a treasure map, with five locations marked with a red X. You pick one, and you can get from it a ghost, a map or a chest. The Treasure Chest gives out a prize and a second pick. A Treasure Map pays a prize as well, and also triggers a new round. You can get up to 5 rounds this way.

Should you find the Ghost Pirate, the feature will end immediately and you will win up to 100 free spins. There is also the potential for a multiplier of up to 3x, but certain conditions have to be met first.

During the free games, you can get Skeleton Key wilds stacked on the middle three reels. With 3+ Treasure Chest scatters, you get another 15 free spins.

There is also a feature called Broadside, which triggers only if the Extra Bet was used that round. It also needs for three Galleon scatters to be present on the reels. It’s a feature with a battle between two ships, and you can keep facing different opponents in it, if you’re successful at each level. The payouts keep getting better with each new win. 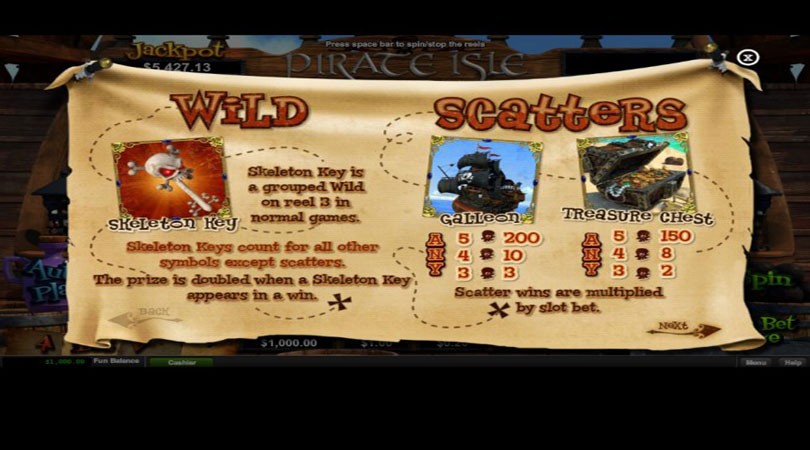 You don’t have a classic look for a pirate themed slot, mostly because the characters and objects appear to be made in 3D style, on a computer. It’s not a bad look, it’s just different. It shows that the designers put in a real effort in building this game, and the quality is there in most symbols.

There is a wealth of features in Pirate Isle that make it a very attractive proposition. It doesn’t cost a lot to play, but it doesn’t pay too much either.