Orc vs Elf tells the story of a battle between the two factions that are often seen as evil vs good in fantasy stories. That battle extends to the reels as well, with the symbols often belonging to one side or the other, each faction has its own version for the wild symbol or the scatter. It is a game that was created by RTG, it has 5 reels with 25 lines, and the payouts go up to $1,000.

If you enjoy the fantasy genre, the good news is that Orc vs Elf is available in the US, at any RTG casino. 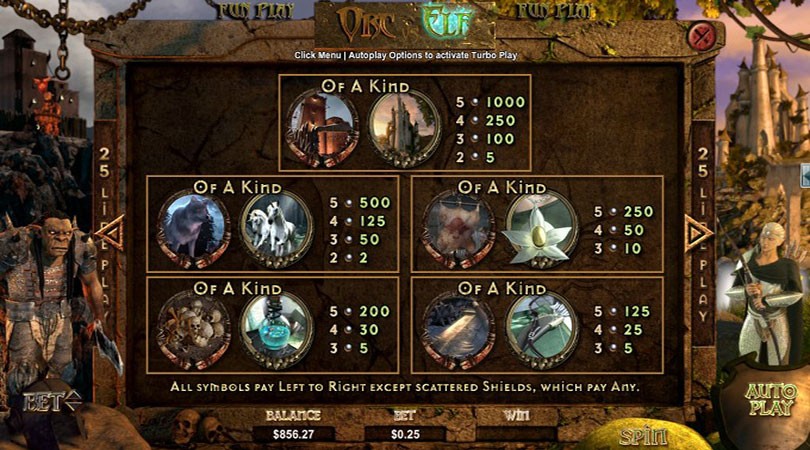 Let’s take a look at the wild symbols first. The Orc side has an expanding wild which takes over the 1st reel when it appears, replacing all symbols with the exception of the Elf Shield. The Elf also gets an expanding wild, but for the 5th reel, and substituting for most symbols, but not for the Orc Shield. They can replace their own scatter symbols though.

Both the Orc Shield and the Elf Shield are scattered, which award payouts of 5x the bet when you have four matching symbols, or 20x when you have all five. They also trigger features, for 3+ symbols.

Another feature symbol is the one marked Battle Bonus. It is a scatter that only appears on the middle three reels. Get it to appear on all three, and it will give you in exchange a battle feature, where the orc faces the elf. You pick the side that you think will win, and if you’re right you gain access to a feature. The Orc can give you access to Goblin’s Gold, while the Elf awards Woodland spins.

The Orc features include Goblin’s Gold, but there are six other bonus games that you can reach. They will give you free spins, and then they will add extra spins, more wilds, multipliers, and super spins, as you advance on the trail of features.

The same happens with the Elf features, where you start with simple 6 spins, but you can get more along the way, plus payouts of up to 200x the bet, extra wilds, super spins, and multipliers.

There are a lot of details in this game, but somehow they don’t work out very well. It’s not the fact that there are two sides, so one is light the other dark. The problem is the 3D quality of the design, the characters looking like they were taken from some video game, but not a particularly good one.

The features make it a very good choice and even a profitable one if you reach those stages, but the graphics manage to ruin it a little bit.