Ocean Oddities might be about the ocean, but it’s not the regular environment that most slot machines with a similar theme are showing you. You get all sorts of creatures that are in different situations than what you usually put them in, including a shark with a leash, a kingfish, a snail riding a seahorse, a crab guarding a No Trespassing sign, and so on. The game’s 25 pay lines give you a chance to win as much as $40,000.

RTG makes all its slot machines available for the US market, so if you’re based there you will be able to play this one as well.

It’s a cheaper slot to max out than most that come from RTG, wagers only reaching a maximum of $25 here. The coin’s maximum value is $1, and that’s the line bet value as well. 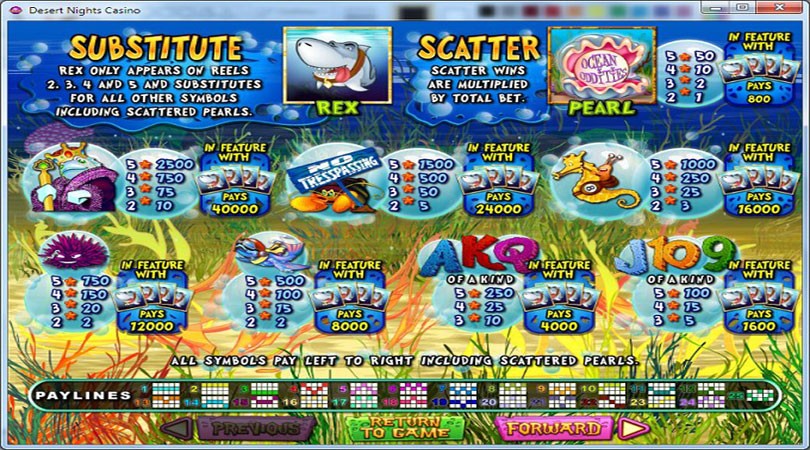 Rex, the shark, has a leash and looks like the ocean’s guard dog. It’s a wild symbol as well, which contributes to various pay lines and forms combinations on them, but only while helping others. It’s used in the last four reels only, so it can’t form its own combos. The upside is the power it has, to even substitute for scatter symbols.

The Pearl is that scatter, which pays 1x to 50x the bet with up to five such symbols present in any position.

You also win 10 free spins when there are 3+ Pearls on the reels, and going from left to right. The Rex wild has a 2x multiplier which it applies to the prize awarded with its assistance. With up to four Rex wilds in a combo, the multiplier goes as high as 16x, so the jackpot is now worth 40,000 coins instead of 2,500, while the scatter pays 800x the bet instead of 50x. 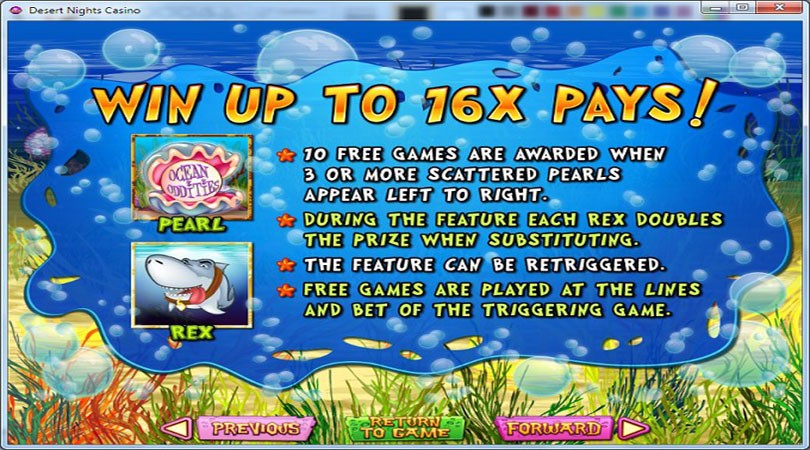 While it doesn’t look that special compared with other slot machines with an ocean theme, the characters do things that are usually reserved for the human world. The oddity bit was well handled, and the game is a lot more fun than your typical slot machine that sports this theme.

Ocean Oddities might be a bit of an oddball, but it does it in an endearing way. You get paid well, but that’s only in free spins mode. It’s going to be a bit of a disappointment in the base game.