Mystic Dragon is one of the games that RTG created for its players, and inside you’re going to discover a story that seems like something you would’ve read or heard as a kid. It’s a story with knights, with dragons, treasure chests filled to the brim and erupting volcanoes. There is even that beautiful princess, present as a symbol on the 5 reels. The game offers 25 bet lines and the rewards can be impressive, going as high as $100,000.

Look out for Mystic Dragon if you’re playing at a casino powered by RTG, and no worries, it will be available to US players as well.

Though the odds might not be that great, the payouts in this slot will go up to $100,000. It’s the equivalent of 20,000 coins, which you get for a combo which has three Dragon wilds and two Knight symbols in it. Without the wilds applying multipliers, the payout for five Knight symbols is at 2,500 coins, or $12,500. 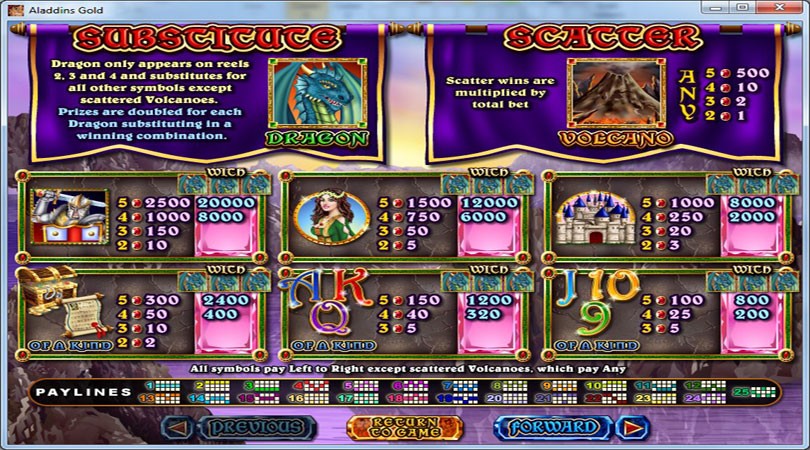 The wild symbol is of great importance in Mystic Dragon. The reason is the multiplier which the Dragon wild applies whenever it’s part of a combination, and which takes each wild into consideration. With one wild the multiplier is at 2x, with two wilds it’s at 4x for the combo, and with all three Dragons present on the payline it will be at 8x. The reels on which wilds can appear are the 2nd, 3rd and 4th. The Volcano scatter is the only symbol which the wild can’t substitute for.

Speaking of the Volcano scatter, it can bring the player impressive payouts, as for five of them present anywhere on the reels the payout can go to 500x the triggering bet. The minimum payout, for two Volcanoes, is at just the bet value.

The scatter is impressive for another reason as well, the free spins which it triggers. Get 3, 4 or 5 Volcanoes scattered on the reels, and you will be rewarded with the cash prizes I previously mentioned, plus with 7, 15 or 100 free spins, respectively. These are even better than the base game spins, as they have a 2x multiplier for their wins and they come with stacked Dragon wilds instead of regular ones. You can even re-trigger the feature, which I imagine could very well happen if you trigger the maximum number of free spins. 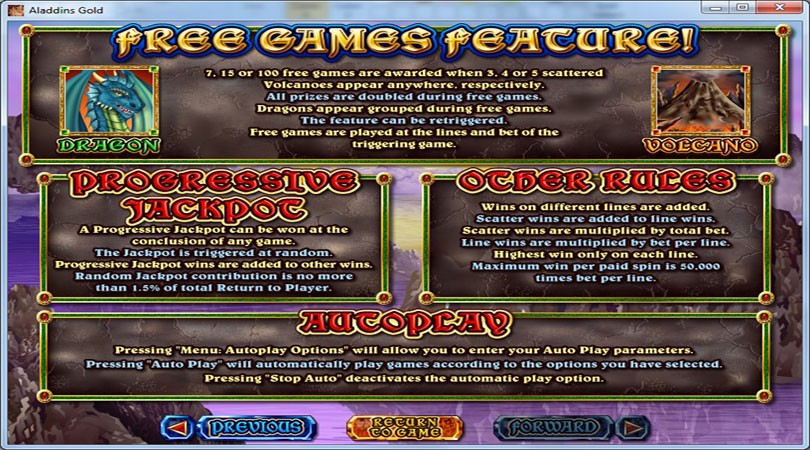 It’s a good design for this theme, with all the elements to tell you what the story is about, from the princess to the knight and the dangerous dragon. The poker cards might be present, but they don’t annoy as much as in other slot machines.

It’s a great game, and I say this mostly thanks to the top prizes and the features that you get along the way. The graphics are good also, but those wilds which multiply payouts of up to 8x and the 100 free spins are the ones that make it attractive.