Megasaur is a game that was created by RTG, with a theme that is not often approached by developers, though there are some examples out there. That theme is dinosaur related, the action either taking place at some point in the very distant past or being some sort of Jurassic Park-style area. Either way, you play on 5 reels and you wager on 25 bet lines, and in exchange, the game offers a progressive jackpot which can award over $1 million.

You will be happy to hear that this game, which has a huge payout and a very small bet requirement, is accessible to players based in the United States of America.

The bets are built in a way that will allow you to go after one of the progressive jackpot values. I’d recommend sticking with the maximum wager of $5, given that it gives you the best prize possible. You spend between $0.05 and $0.20 per line in this game, so the betting range is from $1.25 to $5.

As I’ve mentioned before, the Megasaur Jackpot can be won in this game, and it will bring you even payouts of more than $1 million USD. The jackpots which can be won are called Mega, Major, and Minor. The fixed payouts will bring up to 2,000 coins, with top values of only $400. 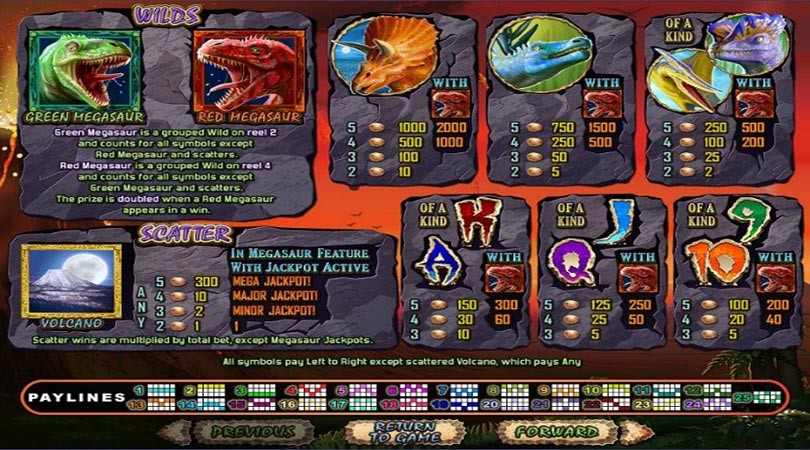 Two wild symbols are included here, a Green Megasaur for the 2nd reel and a Red Megasaur for the 4th reel. They’re both slot machines which land stacked on their reels, and the Red one can also apply a 2x multiplier if it manages to help out with a win.

The Volcano scatter is going to be present in a minimum of two spots in order to bring you prizes, while the bigger ones, of 300x the bet, come from five scatters. Three Volcano scatters will bring you free spins, up to 10 games for each triggering symbol.

It is in this Megasaur Feature that you can win the progressive jackpots, by landing up to five scatter symbols with the Volcano. 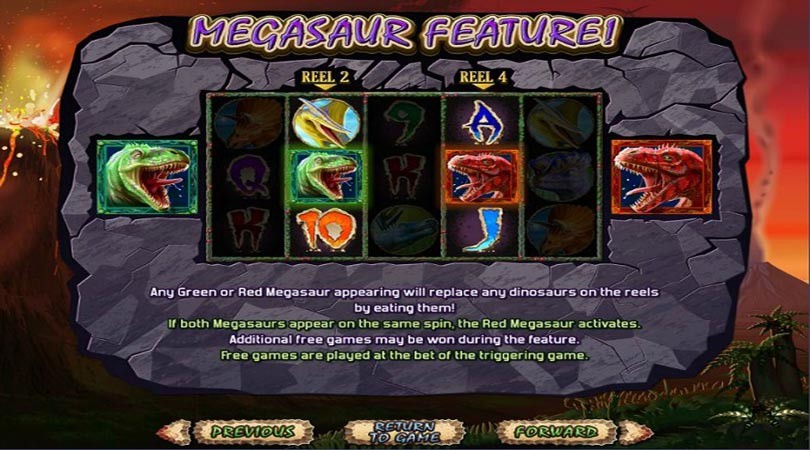 The payouts might be huge, but the game doesn’t have nearly as good of a design as the cool theme might indicate. There are poker cards which were done in a horror style font, and then there are the various dinosaurs, some carnivores, others herbivores.

With bets of up to $5 and progressive jackpots of $1+ million, the only obvious conclusion is to play this game, no matter what the features or the design look like.