Medal Tally appears to be themed around the Summer Olympic Games, the game offering images of multiple types of competitions in its symbols, including athletics, cycling, and swimming, to mention a few. It’s got a good design, a progressive jackpot, 5 reels with 25 lines and it will cost you only $1 to spin its reels.

You will be able to play Medal Tally no matter what your location is, as even players from the US have access to this game.

The decision is out of your hands in this case, the game requiring a fixed bet of $1, which can’t be modified in any way. Each pay line gets a fixed $0.04 wager, so as you can imagine pretty much all budgets can be accommodated.

The payouts are not impressive here, not if you look at the ones that the game gives directly. They do go up to 10,000 coins, which is a good return for your investment, but it only means $400 cash. The better alternative is the progressive jackpot, which could give you payouts in the five-figure range. It is won through the bonus feature. 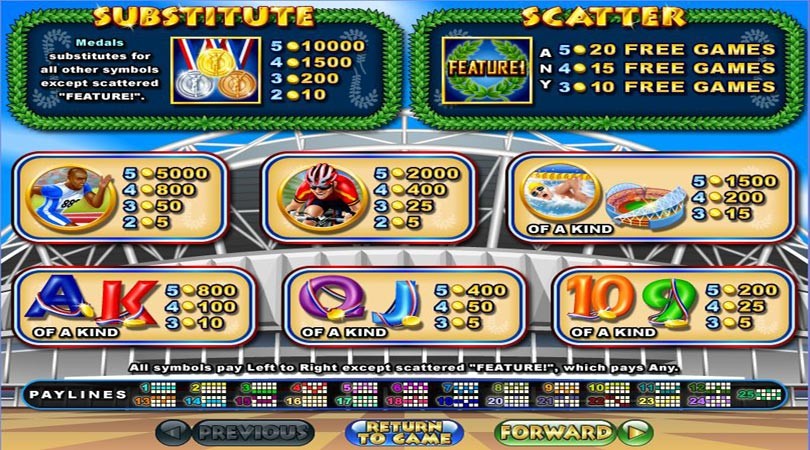 First, let’s take a look at the wild symbol, the one which has the three medals in it. This symbol is capable of paying big, up to 10,000 coins, if it happens to land on all five positions of a pay line. The only symbol which can’t be replaced with a wild is the scatter.

Scatter symbols have only one role in this game, to give the player access to free spins. Get 3, 4 or 5 scatters and in exchange you win 10, 15 or 20 spins for free. Free spins get 3x multipliers, so you can expect tripled prizes. You can re-trigger the free spins.

Symbols with medals in them, which appear during the free spins, will be collected. At the end of the feature, you get a prize which depends on how many medals you’ve got. One example would be the low end, which gives you 5x the triggering bet for 0 to 4 accumulated medals. The prize increases to 8x, 10x, and so on, going up to 1,000x (45 to 49 medals) or even to the progressive jackpot (50+ medals). 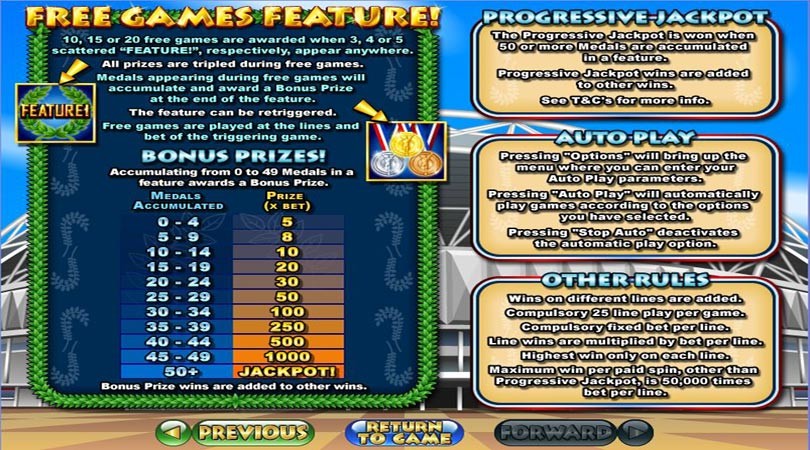 The game has an attractive design, with a clean look and with colorful symbols which add to the atmosphere. A stadium filled with people is shown in the background, while on the reels you get images of competitors in different sports and poker cards with gold medals around them.

It’s one of those very cheap games, which you can afford to play while dreaming about getting the big progressive jackpot.