Lucky Tiger is a game with Chinese inspiration, the symbols being mostly with things that slot machines tend to use when approaching this theme. From paper lanterns to Chinese sailboats, fish and hand fans, the game leaves no question about the theme it offers in this case. It’s an RTG slot, it has the usual 5 reels, but it gets unusual with its pay lines since it has 88 of them. Top prizes offered here will go up to $5,888.

You can play this lucky Chinese themed title if you’re in the US, which should be good news since few developers do this for players from that country.

With 88 lines to activate, and with just as many coins that can be used each round, you might imagine Lucky Tiger to be a slot that is expensive to play, and you’d be right, but only up to a point. The coin denomination reaches a top value of $1, with a minimum at $0.01. You can spend at most $88 per spin in Lucky Tiger.

The rewards tend to use the number 8 quite a bit as well, and if you land the Golden Tiger wild on all the positions of a line you can get $5,888 from it. Unfortunately, this only happens in the Fortune or Gong features. 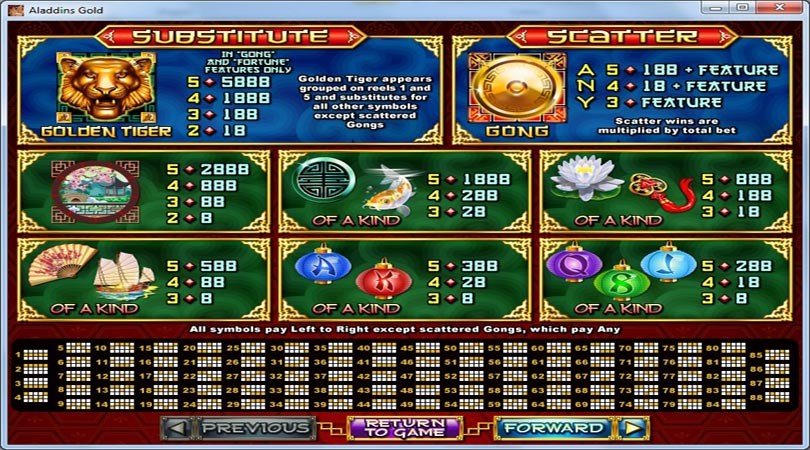 The Golden Tiger, which I assume it’s the lucky one that the title mentions, will be a wild symbol which is stacked on the two reels on which it is allowed to appear. Those would be the 1st and the 5th reels, and when it appears there it can be part of other combinations by acting as a substitute. Wilds will not replace scatter symbols.

The Gong symbol is the one with scattering abilities in this slot. If it appears in three or more positions, it triggers a feature, while with four or more it gives prizes of 18x and 188x the bet.

Should you trigger the Gong feature, you will have to pick one of the scattered Gong symbols, and the game will then show you the feature which can be triggered.

Lucky Tiger is one of the three possible features and it gives you 8 free spins. If you re-trigger the feature with 1 to 5 scatter symbols, you receive between 1 and 25 extra free spins. All the wins get multiplied by 3x.

Gong is another feature, which offers 8 or 18 free spins. The Gong scatters are now extra wilds and they turn into Golden Tiger wilds. This means that you can now have wilds on all the reels, and this is how you can win the top jackpot of $5,888.

Finally, there is the Fortune Feature, with its 8 free spins and with multipliers which start at 1x and go up each spin, reaching 8x during the 8th spin. Gong and Garden icons are now wild symbols, morphing into Golden Tigers. If you re-trigger free spins, they will have 8x multipliers for all their prizes. 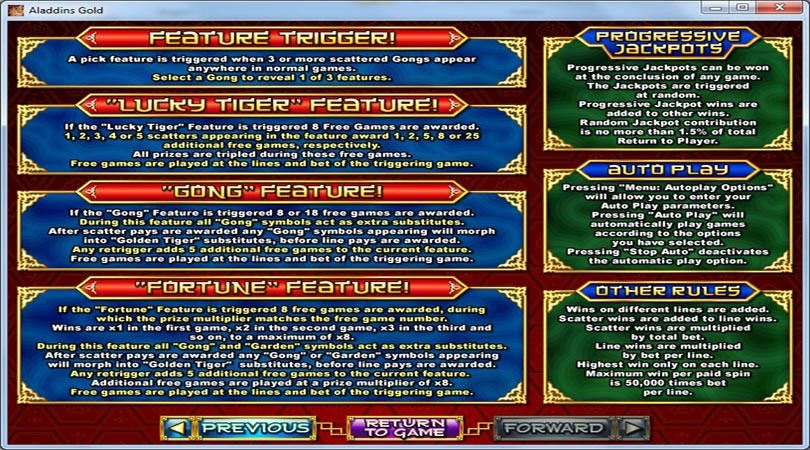 It’s a cute design, but not overly special. It has poker cards which are placed on paper lanterns, so they’re not as obvious, while the rest of the symbols get medals, fish, lotus flowers, hand fans and other objects of Chinese design.

The high number of lines will give you great chances to get paid often, while the bonus features are the ones that are most profitable and fun to play.