Lucky 6 is indeed a very lucky looking slot machine, with a theme that gets inspiration from the Irish. There is not only a lot of green in the slot’s design, but also quite a few symbols with things that are thought to be lucky. One other thing special about this slot is the presence of 6 reels instead of 5, while the number of pay lines sits at 10. Top rewards will go up to $5,000.

Even as a player from the United States, you should have no problem playing this game, RTG is known for the fact that their titles are accessible pretty much from everywhere.

The game is cheap enough to play, the biggest line bets going up to $0.50 only. With 10 lines in position, you can spend $5 on a single spin, no more. 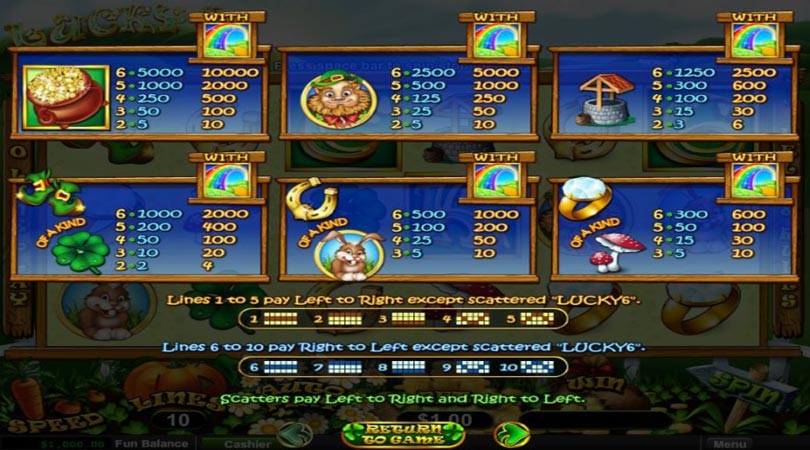 The Rainbow Wild is a symbol which is quite important in this case. It will appear stacked and on the last four reels only, so there is no chance of it forming its own combinations. On the other hand, it doubles payouts it contributes to, and that’s the way to get a prize of 10,000 coins, instead of the regular one which is at 5,000 coins.

The letters and number of the title, Lucky 6, will each appear on their own reels. Get all six to show up on the 6 reels, in scattered positions, and you will win payouts of up to 30x the triggering bet. While scatters need to appear on adjacent reels, they can be present both starting from the left and from the right.

With 4+ scatters, the Lucky 6 Bonus gets triggered, where you are offered 8 free spins and 2x multipliers. Multipliers of up to 5x and additionally stacked wilds can be won inside, if the scatter symbols appear in just the right order, on the same line. 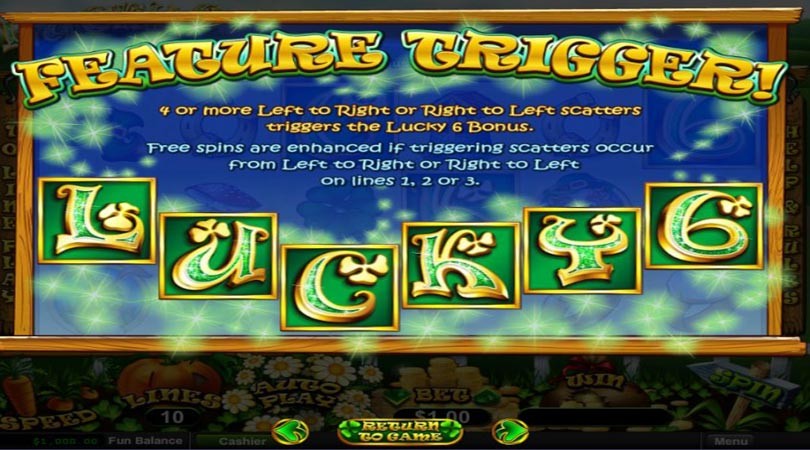 The game did quite well in showing off the Irish and lucky angles, and even though it’s a very common choice for a slot, it’s still a good design. The quality of the graphics is good, the cartoon characters look cute enough, and since there are 6 reels present, it’s even a bit unusual, but in a good way.

Give Lucky 6 a try if you’re feeling lucky. It does well payout and features wise, but I’m not as happy about the presence of only 10 pay lines. Still, it’s going to be a cheap game, so it can’t hurt that much to try it out.