Jumping Beans might be a classic slot machine at heart, with the usual 3 reels and 5 win lines, but if you take a look at it you will notice that it looks better than 99% of the games which are in the same category as it is. The quality of the design is out of this world, at least compared with the usual look that a classic slot sports. The theme is inspired by Mexico and it has quite a few symbols on the reels which are associated with that country. The biggest payout offered is worth $1,000.

If you like what you’ve read so far about it, you will be glad to know that this is a slot which can be played by US players, RTG being one of the few developers that offer their games there.

A bet placed in Jumping Beans needs to cover 1 to 5 pay lines, depending on how many you want to play with. Each one gets a coin, and its value will also be chosen by the player. The denomination ranges from $0.01 to $1, so you can spend at most $5 on one spin.

Get the right combo of three symbols to form, and you will be rewarded with 1,000 coins, or up to $1,000 cash. Mr. Bean is the symbol which offers you this prize. The game has two progressive jackpots as well, called Major and Minor, but they are triggered at random, and the best one doesn’t offer that much more compared with the regular jackpot. 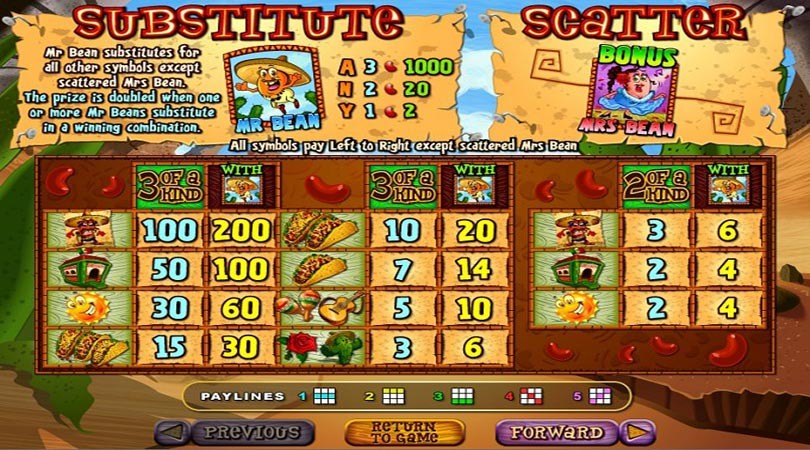 The trigger for the big prize, and at the same time the only one to act like a wild, is the symbol with Mr. Bean on it. It shows you a bean character that is dressed like a Mexican man. Get a combo with three Mr. Bean icons on a pay line, and the reward will be 1,000 coins. Get the wild to appear just once or twice as part of a regular combo, and it will double the value of the prize.

The Mrs. Bean symbol is the other major feature, the scatter. It doesn’t pay directly, but it triggers 10 free spins when you have three symbols with her on the reels. The Bean characters which appear during these spins are collected. The bean counters from the two sides of the game area will let you know how many you got so far. Payouts of up to 100x the bet are possible if you have enough of them.

An Auto Nudge feature is also active in this game. The game will pay the wins first, and then if there are symbols with scatters or wilds just above or below the reels that are visible, it will nudge them into place, making them visible.

It’s a gorgeous slot machine, and I almost never say this about titles which have a classic layout. It’s very colorful, it has only themed symbols and it’s a pleasure to spin its reels and see it form combinations. The symbols have on them images of cactus plants, the two bean characters, tacos, the Sun, guitars and more.

Give Jumping Beans a try, it will be a classic slot machine that you will not regret playing.