Incan Goddess chooses a theme which is quite popular for some reason, that of the long lost American civilization. It’s the Inca people in this case, while in others the theme is inspired by Mayans or Aztecs. The goddess angle is a new one, usually a princess being the main character in their stories. Incan Goddess offers a standard combination of 5 reels with 20 bet lines, with the jackpot going up to $25,000.

RTG makes Incan Goddess available to players from all over the world, and even the United States is on that list of locations from where the game can be accessed.

There are two options to decide on in most slots which come out of RTG. The number of lines is the one that you can modify, but which you should probably leave at the maximum of 20. The line bet can be changed as well, with the range of $0.01 to $5 allowing players to go really low with their bets (just $0.20 for all the lines), or very high (up to $100).

A jackpot of 5,000 coins is not the best one you will see these days in slot machines, but it’s a decent enough value, especially since they can bring you $25,000 cash. 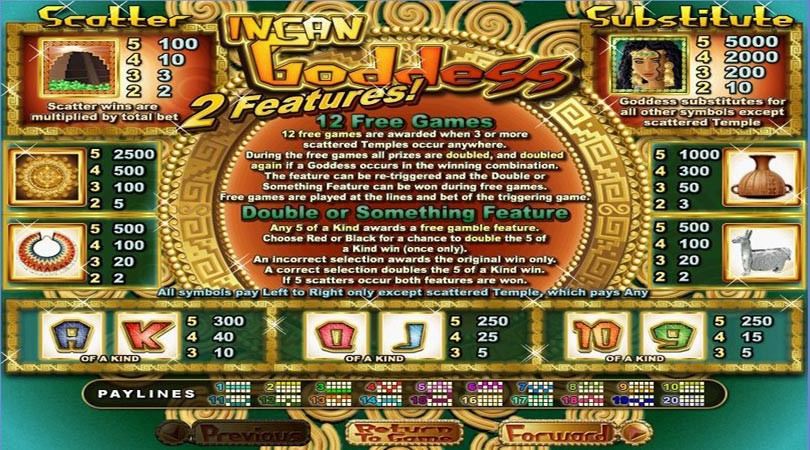 The Goddess icon shows you an Inca girl with a bit too much gold jewelry on her. The symbol is the slot’s wild feature, so naturally, you can expect her to be useful whenever she lands on pay lines where there are partial combinations. The wild take whatever role is needed of her, as long as it’s that of a regular symbol, and the combination forms. Multiple Goddess wilds appearing on the same pay line can bring you prizes, which start at 10 coins and go up to 5,000 coins (the slot’s jackpot).

The only other symbol which has some special power is the scatter, which has the image of an Inca Temple on it. This Temple symbol offers you prizes which start at 2x the bet and go as high as 100x, the exact multiplier depending on the number of scatters present on the reels (2 to 5 needed).

With 3+ Temple scatters, you also receive access to 12 free spins. You get a 2x multiplier for all the wins, but it will go to 4x if a Goddess wild is part of a combination. Re-triggering the free spins are possible as well.

So far, the game didn’t surprise with any of its features. It changes now though, as there is also one that is called Double or Something. It triggers whenever you have a combo of five symbols and it’s a gambling feature which gives you the original prize if you make an incorrect guess, and which doubles it if you do get it right. Either way, you can’t lose.

Thanks to the Inca theme and the focus on the treasures that they left behind, there is a lot of gold in the construction of this slot machine, but there is the ancient temple as well, so a lot of stone surrounds the game area. The symbols are Inca style poker cards or images with things like necklaces, Lamas, the goddess, pottery, and temples.

The game is pretty typical for RTG in most ways, but that Double or Something feature I haven’t seen anywhere else, and it can be quite useful. It could even double the jackpot value, to a maximum of $50,000.