A game which appears to be celebrating the Chinese New Year and the fun that can be had at that particular time of the year, Happy Golden Ox of Happiness is also funny thanks to the Happy Ox that is in the main role in it. You will see all sorts of Chinese inspired objects and characters in the game, all part of many others slots with similar themes. The game gets 5 reels and quite a few chances to win, thanks to its 50 paylines. A progressive jackpot is the main prize you want to go after.

This is a game which people from US can play, thanks to the developer that created it, RTG, one of a few companies that do this.

The game gets unusual when it comes to its betting options, mainly because there aren’t any for you to modify. You use coins worth $0.02 and you cover 50 lines with them, so you have a fixed total bet of $1 each round. It’s one of the more unusual slots I’ve seen in this regard. The payouts offer you 8,888 coins during the free spins, or a progressive jackpot in the base game, which easily gets into the seven figure range. 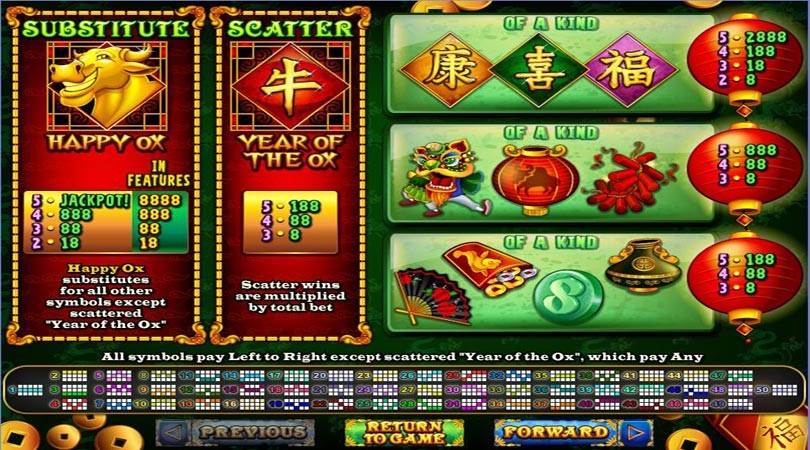 That Happy Ox symbol is the way to trigger the progressive jackpot in this RTG slot. You can win it by landing a full five wild combo on an active line, and you can win $10 to 20,000 or even more. You do this with a bet of only $1 per spin, so it’s a very good deal. The same symbol is the wild, so you will also be able to take advantage of its powers if it takes the place of a regular symbol in combinations.

There is also a scatter, a Chinese sign called by the slot Year of the Ox. It pays up to 188 times the bet (in other words, $188), if you land up to five of them in random positions.

Getting the Happy Ox on both the first and the fifth reels will trigger a Re-Spin feature. Those two reels are locked, with the other three re-spinning by up to 8 times. The number of the re-spin decides the multiplier for it as well (between 1x and 8x). The only downside is that you can’t get the progressive jackpot this way.

You also get your chance to win a round with free spins, 8 of them being awarded in exchange for at least three scatters present anywhere. To top things off, a 3x multiplier is offered as well inside. 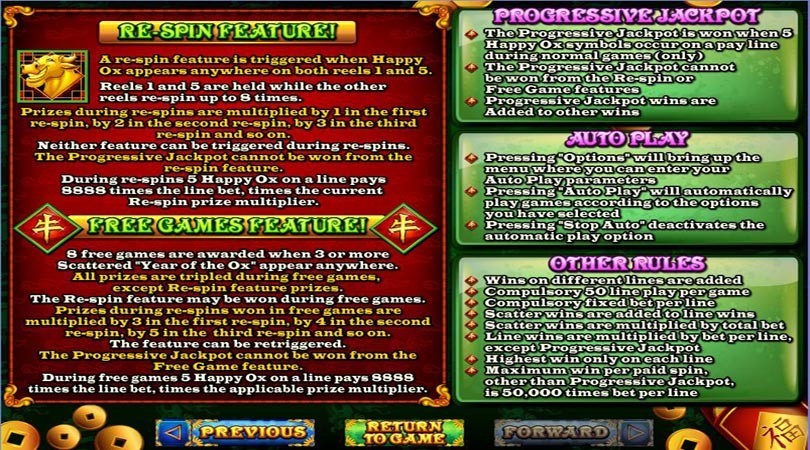 With its Chinese New Year theme, the game offers you Chinese signs, gorgeous decorated pottery, paper lanterns, actors in dragon costumes and so on. The streets of China Town are shown behind the game area.

The game’s fixed bet of only $1 makes it extremely approachable, but its regular rewards are going to be quite low as well. There is the promise of that progressive jackpot as well though, and I’d recommend the slot mostly because of it.