RTG’s Golden Lotus is one of those slot machines that get a common theme, but which nonetheless makes it work and you end up playing a highly enjoyable title. You have a Chinese themed game here, the focus being only partially on the lotus flower, which is only in two of the available symbols. The game is also quite heavy on the number 8, at least where prizes are concerned, the reason being the belief of the Chinese that it’s lucky. Payouts of $44,440 are awarded in the best case scenario, while the slot gets 25 lines on 5 reels.

You will get to play this slot machine no matter if you’re in Europe or in the United States, the latter having no restriction when it comes to this title.

There is a betting range of $0.01 to $125 here, so as you can see it can be easily affordable for most players. A line bet goes up to $5 at most, and you can pick how many lines should be active each spin.

Both the Golden Lotus wild and the Chinese Sign can bring you a payout of 8,888 coins, and in both cases, the maximum value for it can be at $44,440. It’s a good top payout already, but the scatter symbol can do even better, offering 500x the bet value, which would mean $62,500. 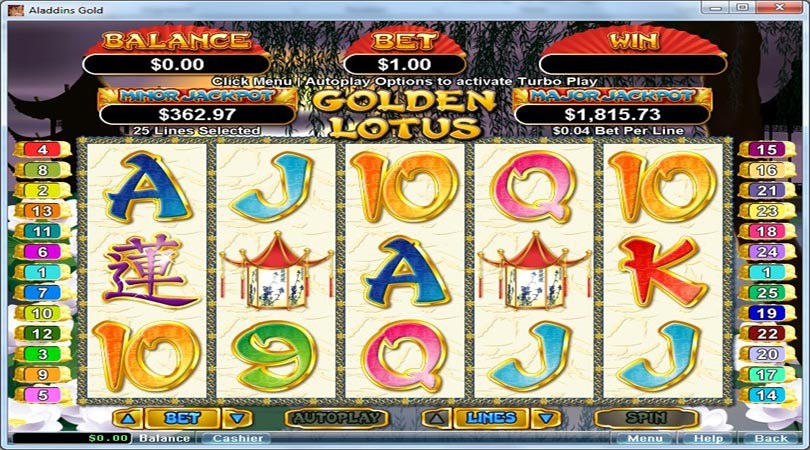 The two Lotus flowers which appear as symbols in the game are both used for the main features. We have the Golden Lotus as the wild, while a White Lotus is a scatter symbol.

Wild is the symbol which has the power to act as another symbol. It can be part of combinations together with regular symbols, covering a position where the combo was missing an icon. Golden Lotus wilds are also more than capable of forming combinations of their own, paying as much as 8,888 coins when this happens.

3+ Golden Lotus icons trigger a Chinese Garden bonus feature, which gives you four picks to make, from the eight flowers shown on the screen. Each prize can give you either free spins (5 to 20 rounds) or cash rewards (up to 100x bet). The free spins all have 3x multipliers.

The other one, the White Lotus, is the scatter. What this means is that it can appear anywhere on the slot’s reels, and without forming a regular combo it can pay based on how many symbols of its type exist. 1x to 500x the wager value is awarded for two to five White Lotus scatters.

The scatter symbol also brings you free spins, 8 of them for 3+ White Lotus that are present. Multipliers of 3x to 5x are randomly chosen for each free spin.

It’s a pretty regular design for a Chinese themed title, and I’m not necessarily impressed with it, but it’s not unpleasant either. You have playing cards in large numbers, you have themed symbols and the lotus flowers, which the title refers to.

I’d play it especially for its features and for its large prizes, and less for the theme choice or the design. It pays quite well and through about three different symbols, it has free spins that can be won in two different ways, plus multipliers.