Goldbeard is the slot’s developers version of Black Beard, a famous pirate which was also the subject of more than a few games and movies. We’re in a slot machine, so a name like Goldbeard feels perfectly adequate, and hopefully telling of the riches that await us. In most ways, the design it has is quite normal/average, though more on the cartoon side than others. With payouts of up to $25,000, with 5 reels & 20 bet lines, it’s a rather typical slot machine in these areas.

Fans of pirate slot machines will have access to this RTG title no matter where they’re from. RTG allows US players to play their games, and they’re one of the few that do this.

It’s going to be an expensive wager if you let it, going as high as $100, but it can be at just $0.01 as well. That would be the minimum value of one coin or of the line bet, while the maximum would be $5. Rewards of up to 5,000 coins, or $25,000, are advertised on the pay-table, but to get there you need to have the help of the wild symbol and its multiplier. 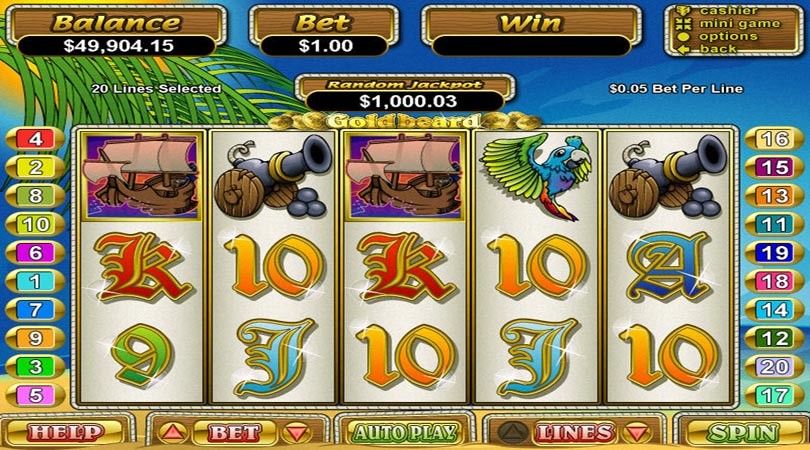 We have the Goldbeard character in the wild symbol, and it will make appearances on just two of the slot’s five reels. The 1st and 5th reels are the ones that can get it and when it is present and helps you get a new combo, it also doubles the prize with its multiplier. The scatter symbol is the only one that doesn’t get the help of the wild.

The wild symbol is the one that gets you the free spins in this slot. It’s not the scatter symbol, which is just a way to get prizes, but the wild, which is needed on reels 1 and 5 during the same spin. When this requirement is met, the reward will be a random number of free spins, between 2 and 4. You can have multiple wilds on the same reel, so the ideal situation is when you have 6 wilds on the reels 1 and 5, and they all give you 4 free spins. The maximum possible number of spins that can be offered is 24. Free spins have 3x multipliers.

Scatter symbols can only give you cash prizes here, and you will recognize them because their image is that of the Gold Coin. Two to five coins present will trigger payouts of up to 100x the wager.

It feels like a very appropriate design for a pirate themed slot machine, but it will be more on the cartoon side than on the realistic one. The themed symbols are mixed with some that have playing cards letters and numbers on them, the latter looking like they are taken from some storybook.

Goldbeard can be an enjoyable way to spend some time, even though I’m not too happy about getting the wild symbol only on two reels.