Crazy Vegas is a game which is dedicated to the wonders of Las Vegas, the city of sin. You have everything on its reels, from Elvis impersonators, to show girls, stacks of cash, dice, roulette games, cards and so on. It’s the game that celebrates what this city can offer you if you’re looking to have fun. It’s also a 5 reel slot machine, with 20 bet lines. Its payouts will go up to $10,000.

Crazy Vegas is just as accessible to US players as the city that inspired it. RTG is a well-known developer and all their titles allow United States players to bet on them.

If you look at the bottom left corner, you will see the two betting options you can use in this game. The bet per line lets you spend up to $5 for each coin, while the lines selected can go from 1 to 20. The maximum bet is at $100, and since the best payout is at 100x the wager, you can win $10,000 cash in Crazy Vegas. It wouldn’t be an RTG title if it didn’t have a progressive jackpot inside, so naturally, there is one here as well. 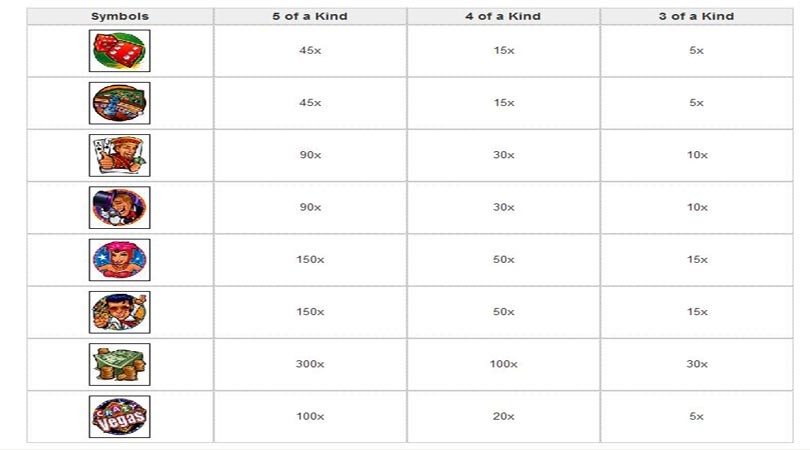 Being the crazy game that it is, it uses the wild symbol as a scatter as well. I’m talking about the symbol with the Crazy Vegas Logo on it, which usually is a substitute for all the symbols, but the game also takes into account how many times it is present on the reels. Getting it on three, four or five positions will trigger a payout which is at 5, 20 or 100 times the value of the bet. This would be the best possible prize offered in the game.

You can win free games by landing poker chips on which it says Free Spins. These appear on the middle three reels only. You need to get them on all three to trigger the feature. The three symbols will show you numbers. You get the number of free spins by adding up the first two symbols, while the third one tells you what the multiplier will be for all the wins.

This game also has a bonus feature. The Big Bonus symbol is present on the 1st and the 5th reels at the same time when this feature triggers. It’s a bonus game with two wheels, one on the outside, the other being inside it. When the wheels stop spinning, they will land on a number. You multiply the two numbers from the two wheels, and the result is multiplied with the total bet.

It’s a good design, but not an extraordinary one. One can at least appreciate the fact that only themed symbols were used for it. The symbols are all in cartoon style, reminding me of comic books more than of animated series.

The fans of Las Vegas will find plenty of things to enjoy in this slot machine. The features are the ones that get the most attention, the rest of it being more in the average category.