One of the prettiest Dracula themed slot machines you will likely see, Count Spectacular actually manages to live up to its name, in more ways than one. The developers from RTG seem to have paid close attention to this game, and you can see it even from the complete lack of playing cards on its reels. Otherwise, you will get the usual 5 reels/25 bet lines, plus a chance to win up to $50,000.

Given the appetite for vampire movies that exist in the United States, I’m sure that many of you will be happy to hear that you should be able to play this slot machine, being designed by RTG, a developer that is the US friendly.

You have to choose both the lines (1 to 25) and the denomination of the coins which will be used on them (which is between $0.01 and $5). You can end up with bets of up to $125, and in exchange the game offers to return your line investment by up to 10,000x, offering $50,000. Two random progressive prizes are also mentioned in the game, but you have no way to trigger them directly. 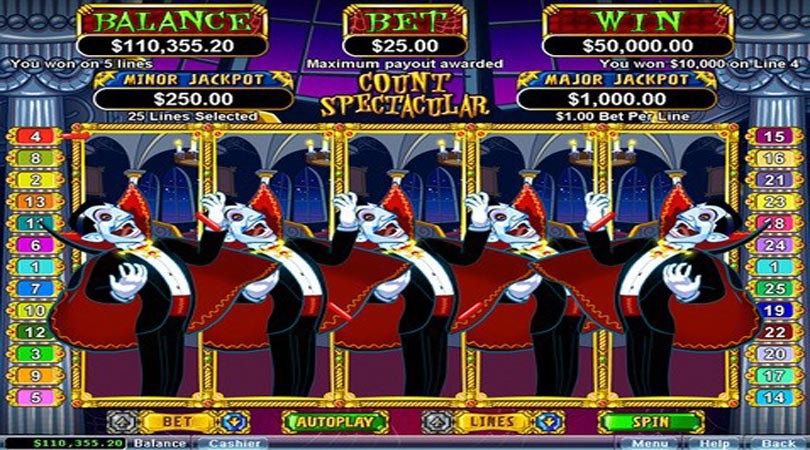 Count Spectacular himself is responsible for offering the jackpot of the slot, and at the same time, it is the wild feature, which acts as the substitute for the other icons. Even better, the wild symbol expands and covers completely the reel it is on. It can even be used as a replacement for a scatter, though only once per reel.

If you land Count Spectacular on the 1st and 5th reels at the same time, you get a feature, with a choice that lets you either pick 4 re-spins with the two reels held or 12 free spins which have 3x multipliers.

The Castle, a creepy looking building that has bats flying all around it, will be the one selected to be the scatter. As scatters generally do, it’s not important where on the reels they appear, just that there are enough of them. Up to 200x the wager will be offered by up to five Castle scatters.

I’ve loved the design of Count Spectacular, with its images that all feel right at home in Dracula’s castle, or at least this loveable version of it. There are cute bats, garlic, a wolf, Igor’s monster, chariots, coffins, and Count Spectacular, of course. The action takes place inside his castle, and the entire atmosphere gets just the right amount of creepiness in it, while the characters provide the fun.

You have plenty of reasons to try out the game, from the graphics to features and even the prizes, which include a couple of progressive jackpots.